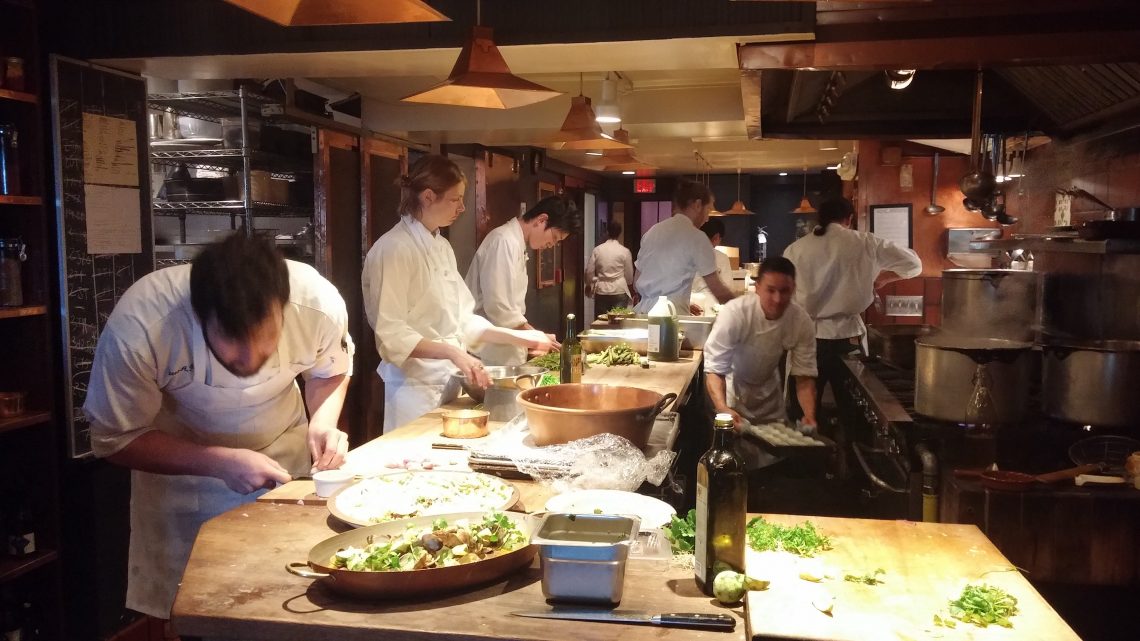 The heads-down work ethic in the Chez Panisse kitchen

As we lingered after an excellent dinner at Ginkgo in Fairfield, I saw the chef in his white jacket join other members of the staff at the empty bar for a late-night supper. On the way out, I veered over to offer a word of thanks to him for a dinner we enjoyed very much.  He smiled broadly at the compliment, obviously glad for the praise.

The kitchen crew in a restaurant usually toils in anonymity.  Called in the trade the “back of the house” and sometimes re-branded as “the heart of the house” the kitchen, often out of sight, is where the magic happens. Celebrity chefs and open kitchens have let in a little light for curious restaurant patrons, but most of us leave a tip, thank the server and head home. 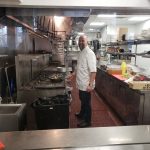 When there is an opportunity, I like to thank the kitchen crew directly. It’s not often that I meet the chef in the dining room. However, the trend toward open kitchens has made it a little easier. Just a walk by “thanks” and a wave draws smiles from the otherwise heads-down work ethic on the cooking line.

In restaurants like Spiga in New Canaan, Bruxelles in Norwalk, the Chamard Winery Bistro in Clinton and even the legendary Chez Panisse in Berkeley, CA it’s a pleasure to watch the action in the kitchen and thank the crew on the way out.

There is an economic divide between wages in the kitchen and tips in the dining room. The top kitchen positions are well paid, but for line cooks, prep people, and dishwashers, it’s often an hourly rate that’s never quite enough.

The industry was awakening to this problem before Covid.  As restaurants bounce back it’s even more pressing, as they compete in a hot job market for staff.  Several paths are being explored to try to address the problem.

A few years back the trendsetting New York restaurant owner Danny Meyer announced that he would do away with tips at the Union Square Cafe and his other restaurants in favor of raising prices and distributing the increase among the staff. Other restaurants tried adding a service charge in lieu of tips to spread the money around.  Both ideas flopped.

Servers were naturally reluctant to give up earnings for the common good. Patrons didn’t really get it, tipped anyway, and wondered why dinner seemed so pricey. Then Covid knocked the restaurant business for a loop.

As we return to the good old days of restaurant dining, I’m seeing some places adding a service charge to directly support the kitchen staff.

At Restaurant L’Ostal in Darien the check states, “A 2.5% charge is added to help support the wellness of kitchen team members,” which is added before sales tax.

At Don Memo in Westport a 20% “included gratuity” is added to the check after sales tax that is, “distributed to our entire staff, both front and back of the house.”  The stated goal, printed on the bill “is to change the wage imbalance that has forever plagued our industry.”  There is still a tip line on the credit card receipt for money that “will go directly to your server.”

A 3% “Kitchen share” is added to the bill before the sales tax at Norwalk’s Tavern at Gray Barns without explanation.

Tabla in Tannersville, New York states on the menu that a (substantial) 10% “Living wage charge” will be added to each bill with no further advice on appropriate tipping.

The dust will eventually settle on this. Restaurants will have to take some action to attract quality workers to the stressful pressure-filled back of the house. Right now lots of ideas are being tested. Customers appear to be aware of the problem and willing to step up. They don’t seem to mind surcharges but do balk at higher prices.

These examples aside, the vast majority of restaurants have not yet adopted surcharges to rebalance wages, but it’s likely they will – both to do the right thing and to meet the competition for staff. A pat on the back after dinner isn’t enough, but I’ll keep thanking the kitchen when I can.

Next post From Sunday Arts and Style: Plum Torte -- A Fall favorite for four decades