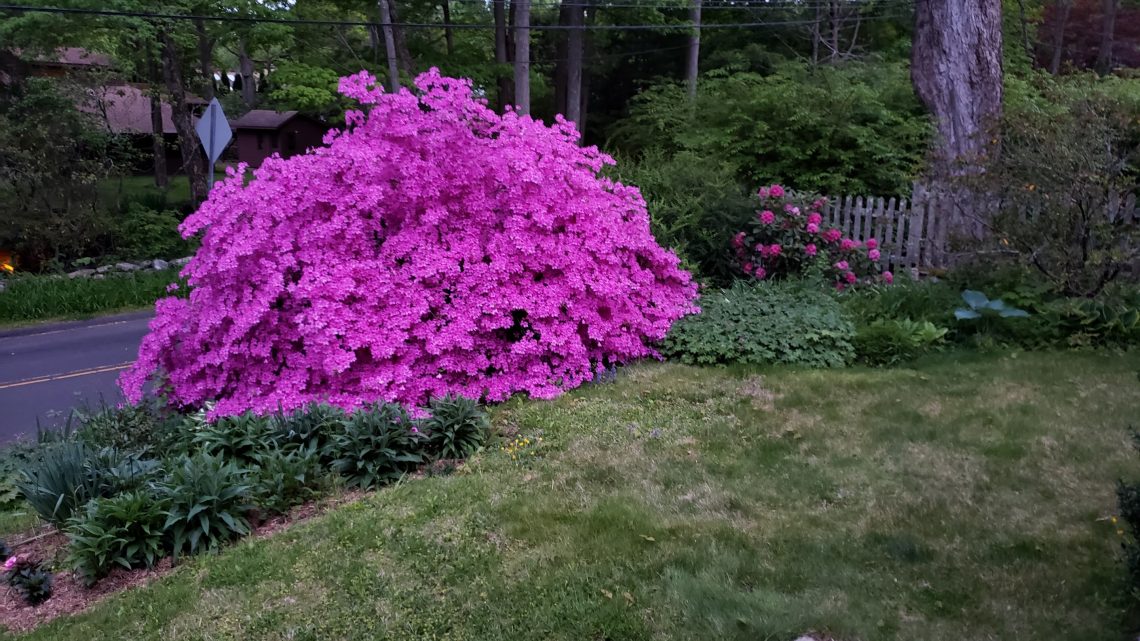 There’s a glorious lavender azalea in our front yard, so dazzling that it stops traffic. Cars slow down, walkers point, phones come out to snap a shot.  I’m told it even has a posting on social media.

Last year, it looked like a tonsured monk when all but the buds closest to the ground were zapped by a late season frost. This year has been an exceptional spring for all blooms.  I hope you’ve had the time to notice amid the pandemic. Nature is a great stress reliever. 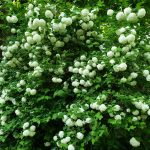 Despite the lack of snow this past winter, the spring show has been spectacular. Lilacs that need a snap of freezing temperatures, cherry trees, flowering pears, and the dogwoods have all put on a seasonal show that we haven’t seen in years.  Even our holly was covered with tiny flowers that only the bees could find.

The dandelions were at full throttle.  They’ve dotted my yard with a sprawling yellow display and carpeted long stretches along the Merritt Parkway. Buttercups, bugleweed, wild strawberry, and forget-me-nots in blue and white plus a host of nameless (to me) spring wildflowers are a boon to bees, even if they’re called weeds for horning in on pristine suburban lawns. You can imagine what a hodge-podge our yard is. 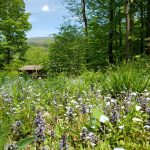 A wildflower lawn in the Hudson Valley

If mowing in May can be resisted, the reward is buzzing pollinators feasting on a tweedy lawn of blue, yellow, and pink.

In fact, there is a new movement called “No mow May” that has the aim of preserving lawn wild flowers as early season sustenance for pollinators. I can get on board with that.  Some towns have even suspended their lawn maintenance rules to let spring flowers flourish in taller than usual grass.

For all the smiles spring floral displays bring, it’s the bees that are the happiest of all. They’ll share their joy with us by making lots of delicious honey.

Honey has been described as, “nature’s perfect food.” Not the donut as I always thought.  It is, of course, a great natural sweetener, but also claims nutritional and health benefits. 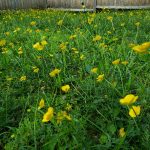 Buttercups in my unmown lawn

In fact, honey is sweeter than sugar.  If your recipe calls for a cup of sugar, use ¾ or even less honey.  Billy Bee honey has a handy chart to convert measurements.

Honey also adds flavor.  Darker honey usually has more. Buckwheat, for instance, has an almost molasses character. Ubiquitous clover honey is mild and floral. Orange blossom has, as you might expect, orange-citrus notes gathered as the bees pollinate the orchards.  Popular wildflower honey comes from a variety of blossoms and can vary from jar to jar as the flowers bloom.   If you ever have the chance for a honey tasting, take it.

Sought-after tupelo honey, from the trees of the same name in the Florida panhandle, has a light color, mild floral flavor, with complex cinnamon-spice notes.  The  harvest season is short, only about three weeks in early spring. Holley Bishop’s entertaining book Robbing the Bees tells the fascinating story of harvesting this rare honey. 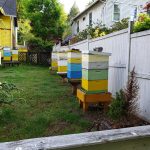 Keep an eye out for Andrew’s brand honey for some local flavor. With hives across Fairfield county including in Silvermine, the honey is pollinating local crops and gathering nectar from Connecticut wildflowers. Andrew’s is a favorite of New York chefs and popular at farmer’s markets across the region.

I’ve always liked the idea of cooking with honey. To me it has a natural appeal. Honey adds flavor, is more nutritional than sugar, is a more natural product, and is purported to have health benefits. But, I’m sorry to say, it has not entered general use in my kitchen.

We always have a jar or two around, a bigger one of clover or wildflower and smaller ones of named-varieties like citrusy Linden.  It adds a balancing sweetness to a sharp vinaigrette. It’s a ying to the tangy yang of mustard for a popular condiment. Honey is a natural partner for fruit and is a good fit 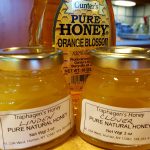 with aged cheese.  I like a cranberry chutney sweetened with honey.

Baking with honey is more of a challenge. You have to compensate for the increased sweetness and added liquid. The reward is added flavor.

I’m inspired by the busy bees in my yard going from flower to flower, gathering nectar.  It’s an idyllic picture of nature.  But in some agricultural areas, bees are essential workers.  Roughly a third of what we eat needs to be pollinated.

There’s a host of fruits, nuts, and vegetables that can’t grow without bees: avocados, apples, citrus, blueberries, almonds, tomatoes, and alfalfa to feed the dairy herds. To fill the demand, there’s an industry of itinerant beekeepers who truck their hives from crop to crop during flowering season. It takes more than 1.5 million hives just to pollinate the California almond orchards.

Think about those hard-working bees the next time you enjoy a fruit salad, have a handful of nuts, or drizzle some honey onto a biscuit.

Frank Whitman can be reached at NotBreadAloneFW@gmail.com

Next post From The Norwalk Hour: Easy Vinaigrette Adds Zing to Home Cooking