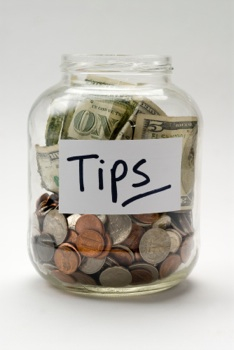 Like so many things in our world today, tipping is changing.  The way we tip, how much we tip, and who we tip is evolving as is the way tips are accounted for, paid, and taxed.

Tips for service in restaurants have always been customary as have tips for hotel bell staff and luggage porters, hairdressers and barbers, cab drivers and doormen.  Tipping has expanded to counter people in some food service categories (Starbucks, Dunkin, and the like) but curiously not for fast food counter staff. Even though it was not expected at the beginning, many people tip for Uber and Lyft rides. Hotel housekeeping staff is routinely tipped these days.

Tipping percentages have changed too, increasing over time. 15% used to be a standard tip in a full-service restaurant, now 20% is the standard. New York Times columnist David Brooks suggested in his October 24, 2019 column on tipping that 20% was fine for meals over $25, but below that 30% was appropriate. I was shocked by that, but then realized that in a quick table-service environment, a diner for instance where the food is inexpensive, I usually tip more than 20%.  The service is most often professional. Why should the staff be penalized by the high-value prices?

Restaurant tips are, in many ways, a commission paid directly by the customer.  Research shows that there is little correlation between the quality of the service and the amount of the tip. There may be some variation for exceptionally bad or good service, but otherwise, most of us just tip our usual percentage. The higher the restaurant prices, and the more the server can sell, the more they make — just like a commissioned salesperson.

Most of the time the restaurant server doesn’t get the entire tip.  Shares go to the bus staff, food runners, and bartenders — all members of the service team.  After some court cases and legislation, servers cannot be compelled to share with non-service employees like cooks, dishwashers, and managers.

In most states, service staff are paid an hourly rate below the minimum wage. A tip credit set by law is deducted from the minimum to allow for earned tips. In Connecticut the State has tried to parse service work and non-service work with the full minimum wage paid for non-service activities like preparing the dining room, setting the tables, and folding napkins. As you can imagine, this is an administrative nightmare.

A December 20 article on ctinsider.com explained that there is general agreement to use the 80/20 rule for the two pay rates, but this has not been codified in legislation. It’s like paying a carpenter as a truck driver when he goes to the lumberyard, but as a craftsman when he works with the wood. Who could keep track?

Tipping at the counter for coffee and other quick-service restaurants is not universal. Some tip generously, some toss their change in the tip jar while others, feeling no special service, don’t tip at all. There is no clear consensus.  In California I tried to tip a Starbucks barista in a supermarket kiosk. He declined, stating that he was a union employee and couldn’t take a tip.

In some counter-service restaurants, when you pay by credit card, a tipping option with suggested amounts pops up on the screen.  Is this an opportunity to reward service, or a strong suggestion by management to leave a tip? It’s a new technique for tipping, and we’ll have to see how it plays out.

In his article, David Brooks goes on to say that tipping encourages servers to establish a social connection through direct eye contact and a display of warmth.  That sounds right to me, but later on he insists that you should always leave a tip in a hotel room, even though you hardly ever see the housekeeper.

For some people, tipping workers who are obviously low-wage workers like hotel housekeepers, coffee shop counter staff and such is a way to compensate for their economic situation.  Generosity is good here, but sometimes I feel like the tip is a subsidy for the owners. I wonder: if the price was higher to include a better wage, would we gladly pay?

Americans are habitual tippers.  The universe of people we tip is expanding and the motivation could be tending more toward guilt and less about the quality of service.  Even overseas, where tipping is not customary, Americans tip anyway. Do we want to reward good service or is tipping more about how we feel toward those who serve us?  Maybe it’s both.

Next post From The Norwalk Hour:Has France come to SoNo?

Previous Article From The Norwalk Hour: A Few Things on My Mind for the Year Ahead