From The Norwalk Hour: Crazy for Croissants 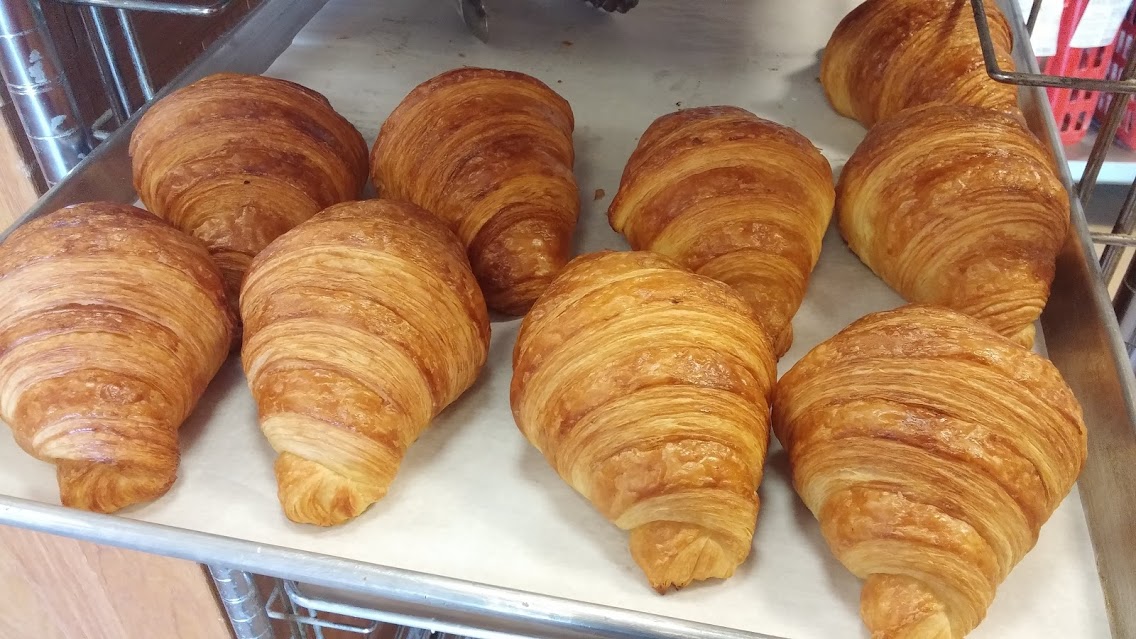 There are many icons of French food, but surely the croissant is the most recognized emblem of the Gaelic good life.  You can have your cassoulet, coq au vin, and bouillabaisse, but for me the croissant says it all in crisp, buttery, flavorful French. 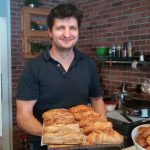 Zoltan Bona of Cafe Dolce with his croissants

They come in all shapes, sizes, and colors.  Each bakery has its own croissant personality.  Baker Chad Robertson, owner of the Tartine bakery in San Francisco and famous for his croissants, said in the January 2018 Saveur Magazine, “There are thousands of varieties and characteristics throughout France.  Some are dense, some are flaky, some are lighter or 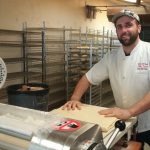 Tim prepares the croissant dough for the sheeter.

darker, and some are crisper or chewier.”

With that in mind, I set out to survey our local croissant sources for a side by side comparison. A trip around town took me to Cafe Dolce, Wave Hill Breads, SoNo Baking, and Flour Water Salt.  Each bakery makes its croissants from scratch – a demanding skill that is time-consuming and calls for special ingredients and experienced hands. There’s no one right way, just 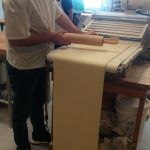 A six foot ribbon of dough

variations on a theme.

“We take five days to make authentic croissant dough,” Tim Topi told me. Tim is the owner and master baker at Wave Hill Breads in Norwalk.  He had 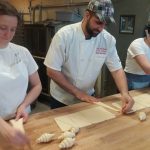 Stretching and rolling the croissant dough

invited me into his kitchen for a close-up look into the croissant-making process.

Day one, he makes a sponge – a loose mix of flour, water, and yeast that ferments and develops flavor. On day two, bread flour is added to make the dough.  The next day, rich Italian butter with 83% fat content is folded in and rolled out to form the classic structure of a croissant. The dough is folded and rolled four times over two days with a good long rest between sessions to build up the flaky layers.

Then the dough is transformed from a pudgy 12 X 18 inch slab to a 6 foot long ribbon ready to be cut and shaped into the classic crescent form of a French croissant. Passed back and forth through a sheeter – 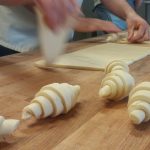 slowly, not to damage the layers – it’s rolled thinner and thinner.  Tim casually winds it up on a rolling pin and transfers it to his wood-topped bakers bench.

Then everyone pitches in to mark, cut, stretch, and roll up the soon-to-be croissants. After another twelve hours of resting, they’re ready for baking to crispy perfection.

A group of us gathered on a March afternoon to assess the local croissants – neighbors who had an interest in baking, had experience with croissants in France, or just like to eat.

The mahogany-dark color of the Flour, Water, Salt Bakery croissants ($4) earned the comment, “The French like them dark.”  There was an “even honeycomb texture, and a “crisp crust.” They were 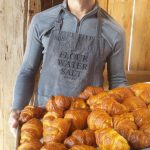 The flavor from Cafe Dolce ($2.50) was a little more “salty and tangy,” with “more aroma,” and a much appreciated “distinctive flavor.”  With a slightly lighter color, they were more “country looking,” had a “cakey” texture, and showed a couple of more rustic steam pockets inside.

Just for fun, Trader Joe’s frozen mini croissants $4.50/8) were included even though they’re not locally made.  They’re left out overnight to thaw and rise. After baking in the morning for 15 to 20 minutes, the house smells great. The tasters liked the “inviting aroma,” “fluffy, light texture,” and the “nice sweet flavor.” 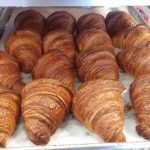 “A yeasty aroma” and “darker color” with a “crisp crust” and “even spiral texture” characterized the The SoNo Baking Company croissants ($2.75).  They were described as “buttery” with a “flavorful crust,” and having “authentic flavor.”

The Wave Hill Breads croissants showed hundreds of finely detailed micro-layers in the flaky crust.  The flavor was “bready,” “delicate,” and slightly less buttery to the touch. Inside the flaky crust, the even texture was “softer” with a few steam pockets.

Some of the croissants were so crisp that they shattered with the touch of a knife creating a debris field around the plate.  Others were merely crisp and flaky. Some had a honeycomb of layers and some had a spiral swirl of flakes inside. They were all buttery and special-occasion rich.

The tasters had a wide range of preference for the distinctively different croissants. Not a bad one in the bunch, there were partisans for all.  When the official tasting was over, butter and jam were passed around and the remaining pieces, of course, didn’t last long. 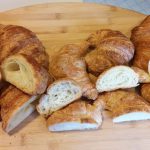 Next post From The Norwalk Hour: Easter is the Time for Eggs

Previous Article From The Norwalk Hour: Travel the World on Main Avenue

From The Norwalk Hour: Dinner for one with French fare and a warm welcome