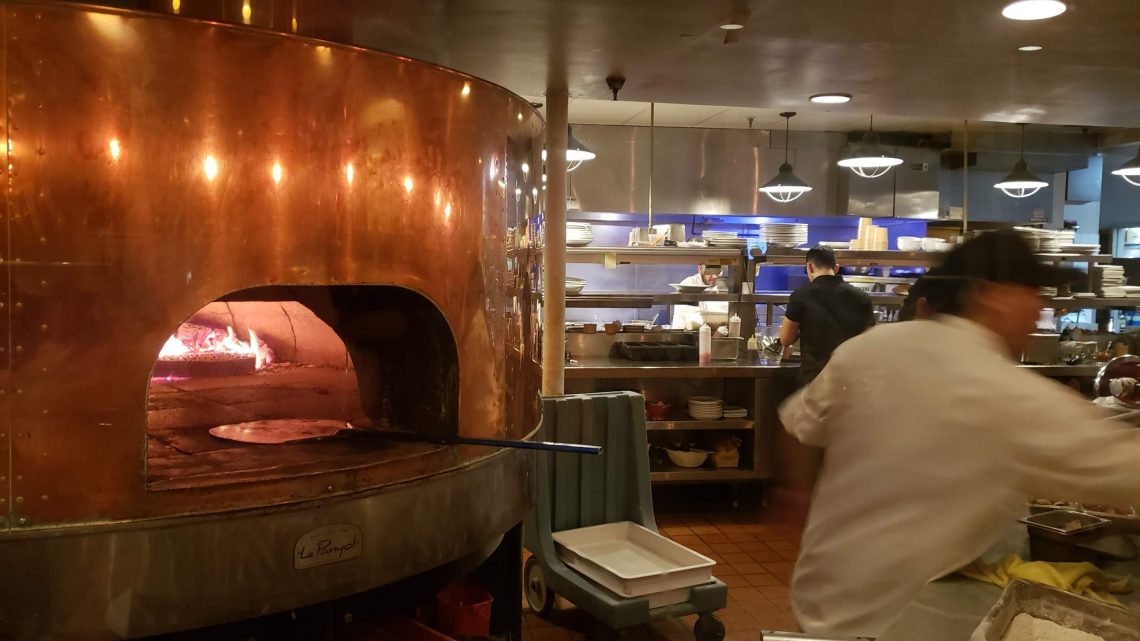 The wood-fired oven at Rizzuto's in Westport

It’s not easy to cook with a wood fire, but according to Bill Rizzuto of Rizzuto’s restaurant in Westport, it’s worth it. Bill’s not alone. Serious fans of pizza will tell you that the high temperature and clay cooking surface yield exceptional pizza — a blistered edge, just the right amount of flavorful char, and a crisp crust. 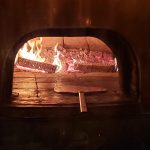 The intense heat of a wood-fire oven.

But there’s more to a wood-fired oven than just pizza. Roast a chicken or a fillet of fish and you’ll see how the oven works its high-temperature magic. The chicken skin blisters and the fish caramelizes as flavors expand.  “You can taste it, the nice smoky flavor.” says Matt Storch, the award-winning chef-owner of Match in SoNo who has been cooking with wood for twenty years. From a chef’s perspective, Storch observes: “Where there’s fire, there’s smoke.”

The oven at Rizzuto’s is 100% organic, or at least as organic as clay from Provence can be.  Weighing in at 11,000 pounds (not including its gleaming copper rotunda) the oven took a week and a half to heat up when first put in use. During service the wood fire takes the oven to about 750 ̊, the sweet spot for pizza according to Bill. 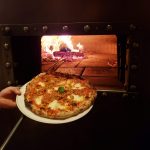 At night, the fire is raked out, but the next morning the oven still holds at 500 ̊ or so. It’s a nice even temperature for baking bread, like the focaccia we enjoyed at a recent dinner. It takes roughly an hour after the fire is rekindled to return to pizza temperature. Pizza toppings and antipasto like vegetables and mushrooms are roasted in the oven to prep for service.

It takes experience and a keen eye to manage the cooking in one of these ovens. “You’ll see the pizzaiolo turning the pizza,” Bill told me, “and checking the bottom so that it cooks evenly.”  If the crust is getting too dark on the bottom, the chef will raise it up on his peel to take the bottom off the bricks and bring the top into a hotter layer of air. You’ve got to know your business and have a deft touch. 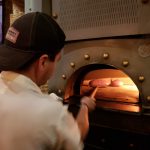 Bread in the oven at Match

At Match a half chicken ($24) will cook from scratch in 20 to 25 minutes in the hot oven.  But if it’s too close to the fire, the skin may burn before the chicken is done. The cook keeps busy watching the temperature and managing the food. Experience dictates when it’s time to add wood or spread a too-hot fire.  Rizzuto advises new cooks to take it slow and gradual. You can always add wood and heat, but it’s hard to cool down an overheated oven.

With an emphasis on seafood, Rizzuto’s offers a daily “Dock Sheet.” Fish can be ordered wood-grilled, pan-seared, or blackened.  The salmon (29) and swordfish (29) are favorites on the wood fire. On our visit, roasted cod with wild mushrooms (30) was a wood-fired special. 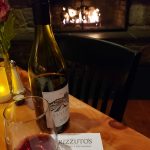 The “Dock Sheet” at Rizzuto’s

The wood becomes a flavor ingredient in the cooking.  Not surprisingly, a network of suppliers has risen up to meet the demand. Storch likes his wood in bigger chunks, split into quarters rather than eighths, supplied by Reynolds Farm in Norwalk.

Rizzuto insists on kiln dried wood which burns constantly, produces less chimney clogging creosote, and gives off more BTUs.  At Petaluma, a popular Italian restaurant and grill on Manhattan’s upper east side, the manager told me the “wood guy” delivers every week from Long Island. 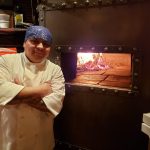 The pizzaiolo at Petaluma

With a lucky table placement, I got to watch the pizzaiolo at Petaluma work his oven at a recent dinner. He moved his pizzas around for even cooking, jostled the fire from time to time, and threw in the occasional log. It all looked effortless, but that’s experience for you.

Rizzuto’s also has a wood-fired grill on the cooking line. While the oven fire is contained, the grill has an open flame just like your backyard grill that throws some serious heat.

The grill adds a distinctive smoke flavor to steaks, seafood, and chicken, but it takes some skill to manage. Too hot and the food will burn, not hot enough and the desired char crust is lost. “You don’t want to cook over the flame.” advised Bill.  “The glowing red coals are best for grilling.” 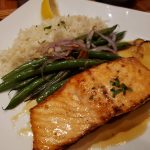 Fresh logs are added to the left and hot coals shifted to the right.

Oak and Almond in Norwalk is another local spot for wood-fired cooking. In addition to flatbreads, they cook chicken, salmon, burgers, and steak with a live wood fire. Watching the fire is part of the fun at these restaurants, if you’re lucky enough to get a table where you can see the action.

When I asked Matt Storch if there was anything I should know about wood-fire cooking he replied succinctly, “It’s really good.” 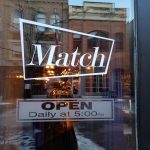 Next post From The Norwalk Hour: Cutting Boards -- the Unsung Heroes of the Kitchen