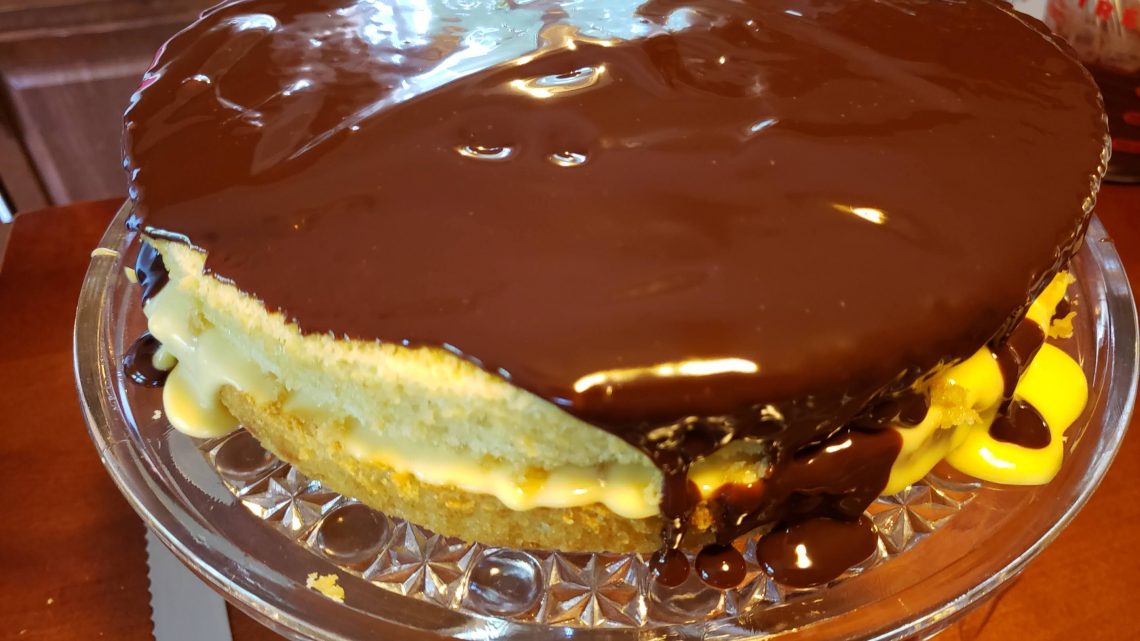 Here in Fairfield County we’re New Englanders, but just barely. I’m told that real Yankees look to Boston as their regional capital, Fenway Park for their baseball, and Cape Cod for their beaches. Doesn’t sound like most of my neighbors.

A New Englander can be recognized by a distinctive state-by-state accent, a love of lobster, and the ability to spell quahog at an early age.  But even without these outward signals, there’s another way to spot a true New Englander: watch their eyes when entering a diner.  If the first glance is toward the dessert case to check out the Boston Cream Pie, you’re with the real thing.

Perhaps it’s the onset of summer or the fact that diners have been off limits for a while, but lately I’ve had a hankering for some good BCP.  It’s not an everyday treat for me, but once in a while it hits the spot, making the calories worthwhile. 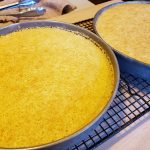 A split layer of moist vanilla cake, lavishly filled with rich pastry cream and topped with a spill of dark chocolate icing, Boston Cream Pie has been a New England tradition for generations. We have Boston’s Parker House Hotel to thank for this homegrown confection, along with those pillowy, buttery Parker House Rolls.

Of course it’s not a pie.  No-one ever said it was — except for the name, of course. The cakes were originally baked in a pie pan, or so the story goes. Hence the puzzling name.

The original Parker House recipe is markedly different from cakes we make today.  It calls for seven eggs, flour, sugar, and butter — no baking powder. The custardy filling includes corn starch, making it more pudding than pastry cream. It used fondant, a professional icing that’s seldom seen at home, as the basis for the topping. 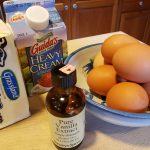 In its heyday, Boston Cream Pie was so popular that it was the best selling Betty Crocker cake mix as soon as it was released in 1958.

It’s so woven into the fabric of New England that it makes an appearance in the Rodgers and Hammerstein musical “Carousel.”  At a New England picnic, when Enoch and Carrie argue, she asks him to tell her something “soft and sweet.”  His reply, guaranteed to get a laugh, is, “Boston cream pie!”

BCP has been the official dessert of  Massachusetts since 1996.

Since diners have been off limits, I decided to make my own BCP.  A survey of recipes ran the gamut from simple to fancy.  The origins of the pie are from the professional kitchen of a high-end hotel, but it can also be an easy bake. Yellow cake mix, vanilla pudding, and chocolate icing will do the trick.  But with time on my hands I opted for a more challenging recipe. 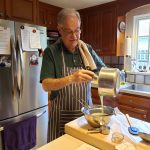 The Betty Crocker recipe didn’t seem quite what I wanted. King Arthur Flour has a good looking method, but the custard called for cornstarch and I wanted a true pastry cream. The recipe at  SallysBakingAddiction.com included a hot-milk method sponge cake, genuine pastry cream and a ganache icing — lots of bells and whistles.

Sally’s recipe was a little fussy, but I had the time and wanted the experience.  It originated in “The Perfect Cake,” a baking authority published by America’s Test Kitchen. Their recipes are exhaustively tested, and Sally had tested it further. With her hints and tips, I felt confident to take the plunge.

The cake, a delicate sponge, was baked from a batter as runny as pancake batter. It used the “hot milk” method, where hot milk and melted butter replace the typical start of creaming together butter and sugar. It was baked in two thin layers, rather than the usual cake split at the equator. 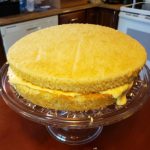 Pastry cream is a French classic. This recipe began by separating six eggs.  Hot cream was tempered into the yolk sugar mix. All was stirred until thick and then enriched with a couple knobs of butter. We’re not counting calories here.

A couple tablespoons of corn syrup in a chocolate ganache that topped the pie added gloss. Granddaughter Moira was in charge of stirring and spreading the easy-to-make glaze.

What could go wrong?

With Moira’s help, the BCP was assembled. The cake was easy to handle, and evenly cooked — a success. 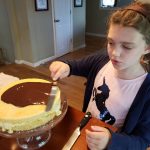 The pastry cream was delicious.   A smile spread across Moira’s face as she had her first taste of this dessert staple. Unfortunately, even though it was well chilled, it was too soft and ran off the cake instead of piling up between the layers.

The ganache, stirred at the last minute, was another taste winner.  Granddaughter Paige scooped up the last drops with her fingers. But we didn’t leave enough time for it to cool, so it too flowed off the top layer.

The family taste panel, including two year old Rhys, was complimentary. They were too polite to point out the obvious appearance issues, but rightly said it tasted wonderful. As we enjoyed our BCP the top 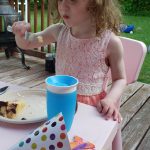 layer began to slowly slide off its perch, lubricated by the pastry cream. A few stabbed-in skewers held it in place.

I’m not done with Boston Cream Pie. I could go the easy route of mixes or try Sally’s method a few more times to get it right. I think I know what I’ll do. It’s a great dessert for Father’s Day if your guy is a true New Englander or even just a wannabe like me. 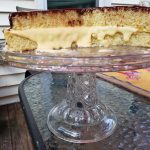 The filling was runny, but it all tasted great.

Next post From The Norwalk Hour: The Pick-Your-Own Farm Season Kicks Off at Jones Family Farm