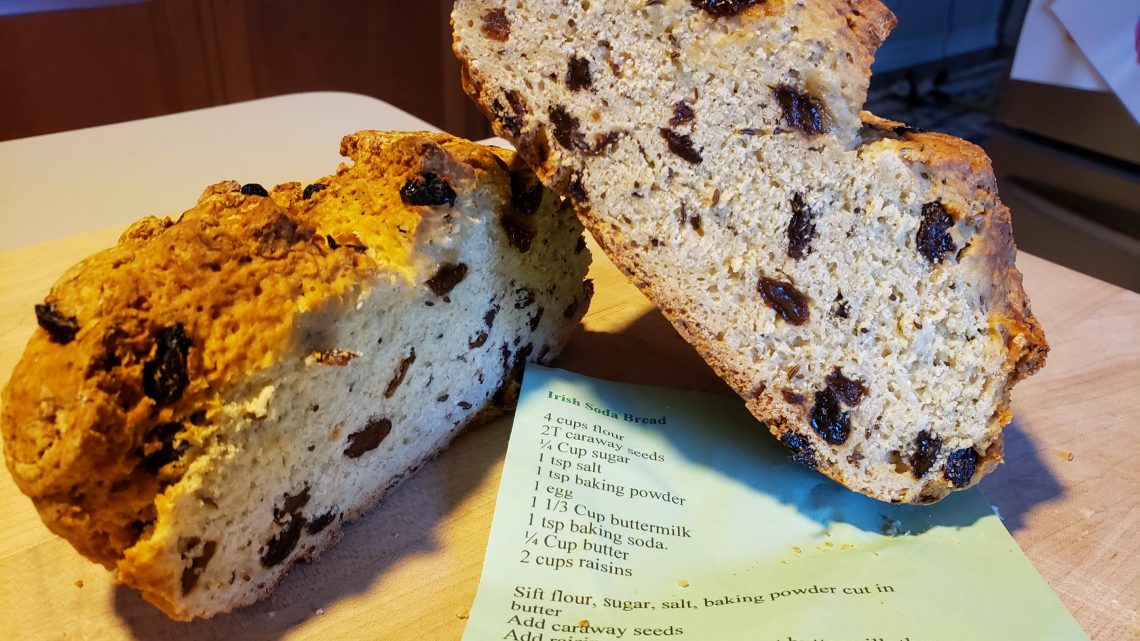 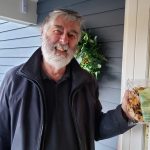 St. Patrick’s Day arrived early this spring. It came, not by leprechaun, but in the person of Steve Hanson. He appeared at our back door bearing the annual loaf of Irish Soda Bread, a gift that marks the holiday for his family and ours.

The Hansons, Susan and Steve, celebrate Irishness by baking and giving away Susan’s family recipe soda bread, a tradition they’ve maintained for forty years.  What started small, as a neighborhood giveaway, has turned into some serious baking. This year they baked more than 200 loaves in their Norwalk kitchen.

It’s really Susan’s heritage that’s at work here; she was born O’Connell with strong ties back to the Emerald Isle.  Her mother’s recipe is used every year  bringing Irish cheer to friends and family from “the O’Hansons”. 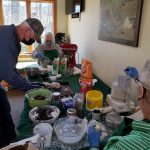 The baking has turned into quite a project. Susan’s sister and her husband, Sharon and Sam Gregorn, come for a week to help.  Steve does the distribution, driving loops as far out as Milford, Ridgefield, and Newtown as well as making the rounds in Norwalk and the nearby towns.

Bulk supplies are transformed into nut-brown loaves over several days.  It’s a well-organized effort, headquartered at the Hanson’s large kitchen table. Sharon measures out the dry ingredients: flour, caraway seeds, sugar, salt and raisins, then cuts in the butter. The bowl is passed to Susan who mixes the dry with the wet: egg and buttermilk.  At the last minute for maximum leavening, she adds the baking soda. 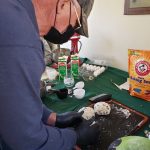 Each batch makes two loaves.  The mixed dough is passed on to Sam, who shapes it into rounds and slashes the top with the traditional cross pattern. At the same time, he manages the baking in the double ovens — watching the time, turning the pans, checking the color, and thumping the bottom of the loaves to check for doneness.  As needed, he resupplies the kitchen with hefty bags of ingredients from the dining room table.   There’s a lot to do.

They baked 125 loaves the day I visited, all seasoned with family chat and Irish affection.

While she mixed, Susan told me that it was her mother that established the tradition. As a child, she helped to bake loaves for family and friends. Now her daughter, Heather, does the same for her neighbors in Asheville, NC 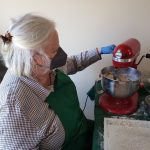 Susan at the mixer

Irish Soda Bread is a relative newcomer to the bread world. It dates to the 1830s when baking soda became widely available.  Times were tough and bread had to be cheap and easy.

The simple recipe of flour, salt, baking soda and sour milk was adaptable to the soft wheat grown in Ireland.  Sour milk was readily available and the baking powder inexpensive.  The leavening came from the chemical reaction between the acidic sour milk and the baking powder.  The resulting carbon dioxide raised the bread.  Tart buttermilk, used by today’s bakers, works just as well. 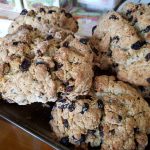 The traditional cross slashed on top lets out steam as it bakes, although according to Trafalger.com it may be to let out the “fairies” and ward off evil.

Originally, the adaptable loaves could be baked in a covered iron pot on the hearth, on a flat griddle, or in a pan.  Shape and size of the loaves varied from place to place.

From its humble beginnings, soda bread has gone upscale. The caraway and raisins that the Hansons include are typical today, but would have been expensive and exotic imported ingredients in the 19th century.  Susan explained that some on her list prefer no caraway, but everyone seems to like the raisins. 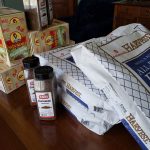 Sliced, soda bread is best eaten with a good slather of butter. Get some Kerrygold Irish if you’re going all out.  It’s good for sopping up the juice of an Irish stew or alongside some corned beef and cabbage. With butter and jam it’s an excellent tea-time snack. I even saw one suggestion to dress it with a smear of apple butter and a slice of crisp bacon. Tempting!

Each loaf that Steve brings around comes bagged with the O’Connell family recipe, but as far as I know it doesn’t get much use. Everyone prefers Susan’s.

Next post From The Norwalk Hour: Seeking Spring at Local Restaurants

Previous Article From The Norwalk Hour: Small Batch Whiskey is a Hot Trend