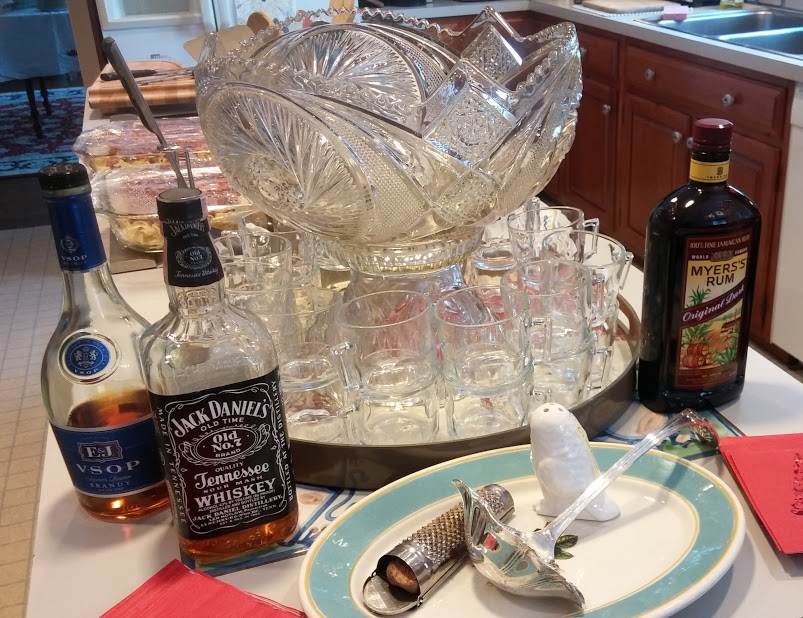 Just a few years ago when large Christmas parties were still in style, there was an annual gathering in our neighborhood that everyone looked forward to.  Hosted by Judy and Michele with a mix of southern elegance and French flair, it was a dress-up gathering in their cozy house, with a piano player, bartender, servers passing bites, and a sumptuous buffet table. 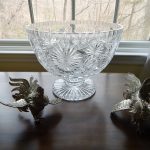 The centerpiece of the display was a crystal bowl of holiday punch.  The punch had a local reputation – delicious but sneaky. After more than one cup, its fruity flavors delivered a holiday wallop. First-timers were warned to proceed with caution. Some did, some didn’t.

Colorful punches and rich eggnogs have long been a source of refreshment and celebration in the Christmas season.

17th-century sailors, returning to England from the far-flung ports of the Empire, brought back the tradition of punch. The five-part recipe was based on the Barbados rum punch poem: One of sour, two of sweet, Three of strong, four of weak, A dash of bitters and a sprinkle of spice, Served well-chilled with plenty of ice.  Tart citrus for lively flavor, sugar for balance, strong spirits (of course), water to tame it, and spice for an exotic note are still the elements of punch.

Communal punch bowls became popular in the taverns and clubs of London. The concoctions, eventually served in individual glasses, were the precursors of today’s cocktails. 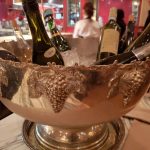 At home, a punchbowl – first ceramic, then gleaming silver and eventually populist glass – were showpieces of pride and prestige.  Many of the more elaborate examples live on as wine coolers in upscale restaurants.

A Colonial Plantation Cookbook: The Receipt Book of Harriott Pinckney Horry from 1770 included this recipe for American hostesses of the day: The peel of 8 Oranges and 8 Lemons in 1 quart of rum. 3 Gallons of Water boiled with 3 lb of loaf sugar and the whites of 8 eggs. 2 and 3/4 pints of orange juice and 1 and 3/4 pints of lemon juice. Strain the quart of rum from the peel and add one gallon more of rum to the rest of the ingredients.

It’s the formula for a potent mix to be sure. 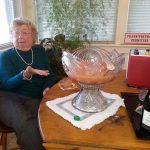 Joyce Witham with a bowl of Christmas punch

These days, popular recipes for holiday punches (alcoholic or not) are often  based on cranberry juice. The bright red hue is a natural for a Christmas color scheme.

The cranberry gets a citrus boost from juice: fresh orange, frozen lemonade, or even pineapple (yes, I know it’s not citrus, but the tropical flavor is appealing). Slices of orange, lemon or lime along with a few bobbing fresh cranberries make pretty garnish.

Most recipes are lifted with some fizz: club soda, ginger ale, sparkling apple cider, lemon-lime soda, or even prosecco, as alcohol enters the picture. The sodas can also account for additional sweetness.

A couple of cinnamon sticks or a sprinkle of whole cloves will satisfy the spice category. Stab the cloves into the skin of a thick orange slice to keep them from floating loose.

We now come to the strong spirits category.  Obviously, this is for the grownup’s bowl.  To keep the fruity flavor, go for something neutral or light like vodka or white rum.  Watch out, this can be stealthy.

Bourbon makes a good partner with fruit flavors. A few shakes of orange bitters in the bowl along with the bourbon lean toward an Old Fashioned cocktail.

Brandy is out of style these days, but it was the mainstay of those early punch bowls. The wine-based spirit is a natural partner with citrus, adding a distinctive flavor. 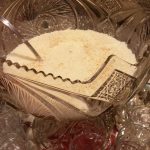 Eggnog is another Christmas punchbowl tradition. I was never crazy about it until I started making my own.  The real thing is a world away from store-bought.  Even the eggnog-averse will come circling back for a refill.

The recipe makes a thin custard (like a crème anglaise) by simmering egg yolks and sugar with cinnamon and clove.  Blend in half and half and chill. Just before serving, whip the remaining egg whites to a froth and fold them in to fluff it up.

I like to put out bottles of dark rum, bourbon and brandy so guests can spike to their own preference and level.

Put out a punchbowl for your holiday gathering, fill it with your favorite flavor, and watch everyone gather around.  They might even start to sing.

Next post From Sunday Arts and Style: Put some sparkle in holiday celebrations

Previous Article From Sunday Arts and Style: Gift ideas for the hungry and thirsty