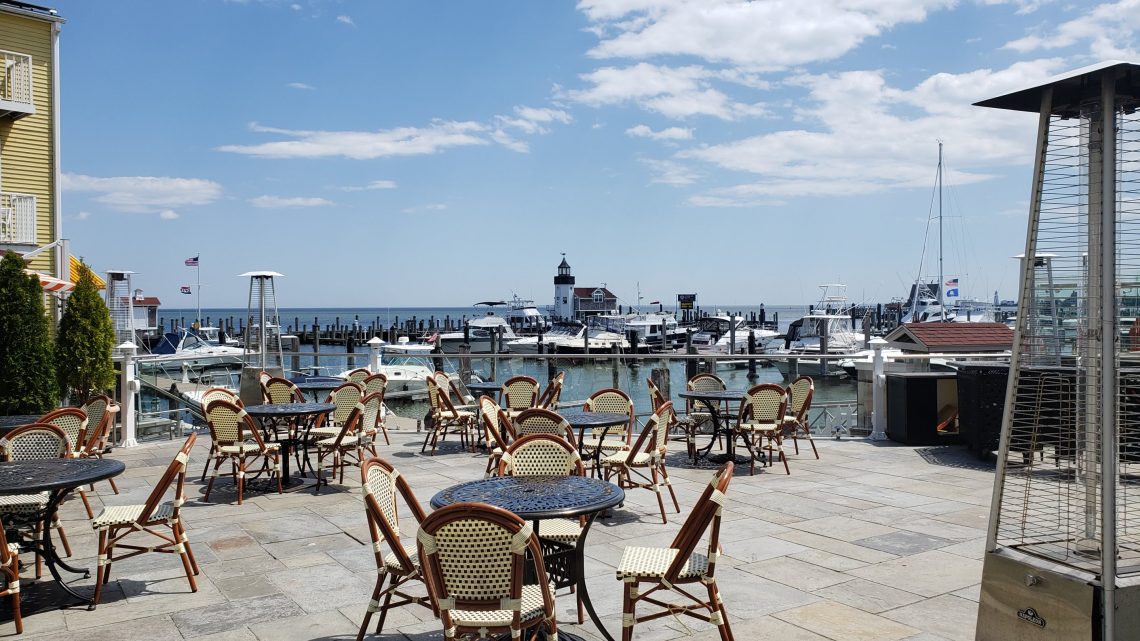 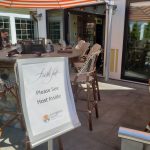 The Connecticut River sparkled, ruffled by the early spring breeze.  At the marina, empty slips were a sign of a season just getting underway.  But The Porch at Fresh Salt was full up at lunchtime.

We were a mix of tourists, locals and hotel guests who had all found our way to lunch at the Saybrook Point Resort and Marina hoping to get a jump on summer. The four of us felt the pull of a water view, listening to the gulls and the slap of the halyards while eating seafood. I wonder if they have that same urge in Iowa?

At the mouth of the Connecticut River, where it joins The Sound, the Saybrook Point Resort and Marina is a luxury hotel with an excellent restaurant. River traffic and marina bustle can be seen from the water- 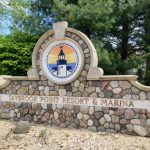 view rooms and the broad patio as well as the sunny Fresh Salt dining-room. It’s something I could watch all day. The resort is the kind of place that gives its nautical coordinates (41.2835332, -72.3505354) along with the street address for contact information.

The spring lunch & dinner menu is loaded with seafood. With a nod to their neighboring state, the menu offers both creamy New England and brothy Rhode Island clam chowder as well as a “Fresh Salt” style, a blend of the two.

We kicked off with crisp, lightly-battered fried calamari ($17) for the table. It came with marinara sauce (there’s an Italian influence on the menu), but tartar or aioli is available too. 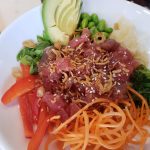 Fish and chips is always a favorite by the water.  Seafood, especially fillets, of cod are a natural partner with the deep fryer.  There isn’t a home fryer that can compete with a commercial unit and an experienced fry cook. Together they can produce culinary magic.

Inside the crunchy batter of this example ($25) the fresh cod fillet was tender and moist, perfectly steamed. 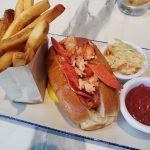 Our son, visiting from California, couldn’t resist the Connecticut-style warm buttered lobster roll ($40) overflowing with claw and tail meat stuffed into a brioche roll and slathered with clarified butter.

The menu was a little skimpy on vegetarian choices, but the house-made black bean burger ($17) was pronounced “just fine” by our daughter-in-law.

Seafood risotto was the special of the day. Oysters from nearby Niantic as well as Massachusetts and PEI (all $4 ea) were featured. At the table next to us, we could see an attractive cheese board ($19) being served.

With an all-day menu like this, lunch orders tend to come from the starter, salads and sandwiches categories rather than the pricier entrees.  They were tempting, but probably too hearty for lunch. 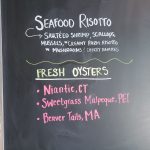 The broad expanse of deck was closed on our visit, but the shelter of The Porch, adjacent to the Fresh Salt bar, was welcome in the cool breeze.  A large open wall afforded a good view of the marina, river and pilings carved into whimsical marine sculptures.

Almost every town on the Connecticut coast has its spot for waterside dining. Casual dockside eateries like SoNo Seaport on the Norwalk River and Abbott’s Lobster in the Rough in Noank on the Mystic River are perennial favorites.

More upscale waterside restaurants include Harbor Lights in Norwalk and Rive Bistro in Westport. Siren Kitchen and Bar on Essex Island, with its new American menu, is accessed by ferry in season and floating bridge the rest of the year.

In addition to Saybrook Point, hotels with waterview dining can be found along the coast. The posh Delamar overlooks Greenwich harbor.  Sweeping views of the sound can be found at The Water’s Edge in Westbrook and the Madison Beach Hotel in Madison.

Fresh Salt was our first stop this season but won’t be our last. Food tastes better when seasoned with a fresh, salty breeze.

Next post From Sunday Arts and Style: Rhubarb, the springtime celebrity of the menu

Previous Article From Sunday Arts and Style: I know good service when I get it