At the end of the year, it’s a pleasure to stop and reflect on memorable restaurant experiences.  This year they’ve been few and far between since things the March shut down.  Although it’s been a long slog for us with no end in sight, it’s been an economic tsunami for the restaurants.

The year has seen a shocking number of restaurants shutter their doors — never to return. But it’s also seen a surprising number who have innovated, persevered, and with a little luck, survived.

Despite the lack of restaurant meals in these pandemic-infected months, I’ve been able to connect with a bunch of food insiders — some notable and others working in glorious obscurity — to share with you a peek behind the swinging door.

It’s always a pleasure to meet the folks behind the scenes — owners, chefs, and industry pros. They’re universally knowledgeable, interesting, insightful, and (most importantly) willing to share. I get a kick out of talking to them; this column lets me pass their stories on to you. 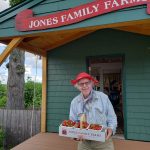 We had a lovely strawberry-season visit with Terry Jones, the fifth-generation patriarch at Jones Family Farm in Shelton. He showed Marsha and I around the farm, as socially-distanced picking was just getting under way. Jones spoke with obvious pride about his family’s stewardship of the farm, the contributions that each generation has made to its success, and the ongoing participation of the sixth and seventh generations.  After the visit, Marsha and I reflected on the Jones’ family connection to the land as we put-up preserves.

In August I had a long chat with Mark Solaz of Master Purveyors in New York. His family business has supplied top-notch prime steaks and roasts to elite New York area restaurants since 1957.  He explained 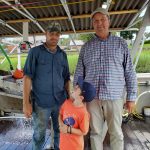 Three generations of the Bloom family

in detail why steakhouse beef is superior to what you can get in supermarkets and why it’s worth the extra cost.  Now, with restaurants closed or restricted, Master Purveyors has moved to mail-order, getting the prime dry-age steaks directly to you and me.

Norm Bloom of Copps Island Oysters runs yet another multi-generation family business. He’s helped to make Norwalk the oyster capital of the East Coast, but you can often find him on the docks in Norwalk supervising the work and explaining why this is the perfect place to cultivate oysters and a family. 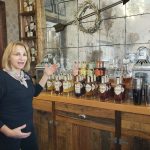 The search for pure, clean, authentic flavor led Lelaneia Dubay to start the Hartford Flavor Company.  Behind the swinging door of her Hartford tasting room, she creates remarkable cordials — low-alcohol infusions for mixing in cocktails, flavoring tea, zipping-up baked goods, or pouring over ice cream. From traditional flavors like cranberry (the original) and lime she has  branched out to cucumber, rose, lavender, chai spice and birch. Each flavor, from commonplace to exotic, is simply delicious. 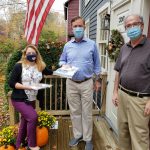 In October, Governor Ned Lamont stopped by our front porch with Connecticut Representative Lucy Dathan for a bite of election cake.  While not a restaurant insider, he was certainly the most prominent political big-wig to appear in Not Bread Alone this year, or any other for that matter. Gracious and personable, he pronounced the cake delicious.

Up to his elbows in mozzarella curd and hot water, Angelo Competiello of Angelo’s Specialties showed me how he’s been making fresh mozzarella since age 16.  Handmade in the store every morning, his cheese has the memorable old-world flavor and authentic texture that is rare today.  He makes the difficult work seem easy and the delicious result seem inevitable. 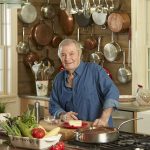 In November I was lucky to spend a half hour talking with Chef Jacques Pepin.  I can’t think of anyone in the foodservice world that doesn’t respect Pepin and wouldn’t defer to him as the patriarch of American cooking, despite his French background (and charming accent).  He’s been on the U.S. food scene since the 60s and has carved out an honored role in the food world as a chef, author, and educator. It was a thrill to speak to him about his latest book, discuss pandemic cooking at home, and hear some anecdotes from his storied career.  The opportunity to visit with him from his home on the Connecticut shore was certainly a high point of my year.

Thank you for listening in as I share the stories of these interesting people.  They’re the ones who work tirelessly to give us the restaurant and food experiences that we all crave.  The conversations I had were bright spots in a dark year for the foodservice business.

Next post From The Norwalk Hour: A Spicy New Year’s Resolution