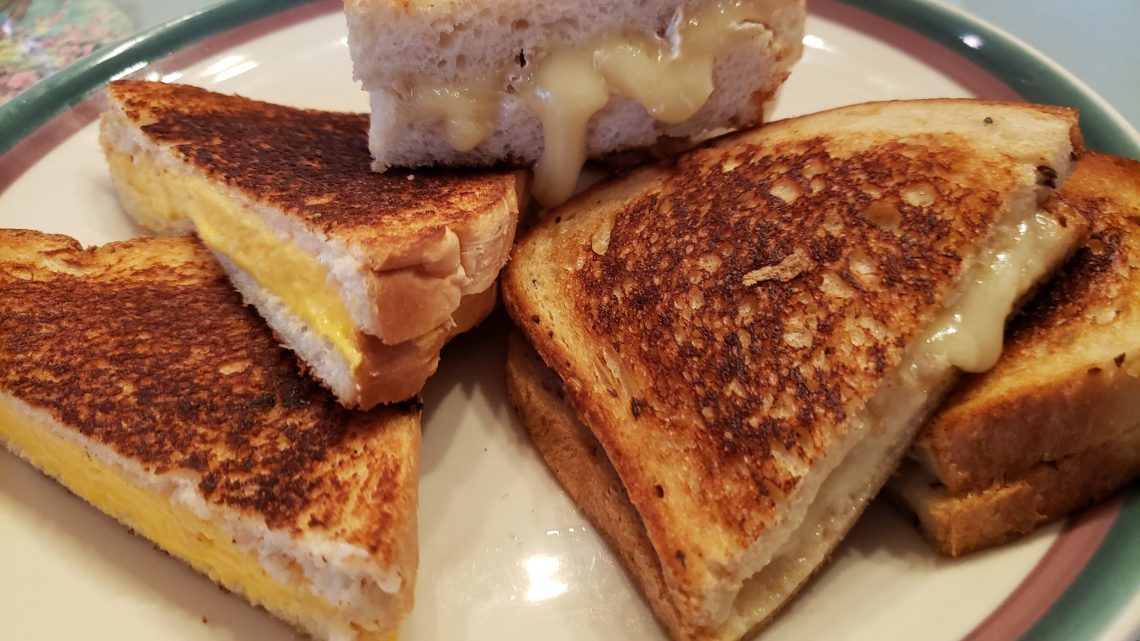 Golden brown with a good crunch leading up to a creamy (sometimes gooey) interior, a grilled cheese sandwich is a favorite for all ages. It’s a staple of both kid cuisine and Sunday suppers (probably with a side of tomato soup), but you can see it on high concept menus too. 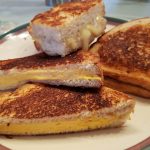 The classic Kraft American on Wonder is a gateway temptation, leading to a lifetime of grilled cheese both simple and sophisticated. Unsuspecting kids don’t know that they’re being lured into a world of satisfying sandwiches.

If you think it’s just yellow cheese on white bread, think again. There’s nothing wrong with that combo, but there’s so much more to experience.  Cheeses from around the world and breads of all colors, shapes and flavors are ready for the skillet. The sky’s the limit.

Meltability is the most important characteristic for the cheese. Sharp cheddar, for instance, doesn’t melt smooth and creamy, but for me, the great flavor is worth the compromise. 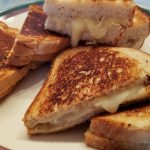 Beyond how it melts, pick a flavor that suits your style. Alpine cheeses like gruyère, comté, and Swiss are popular and melt well.  Semi-soft examples like havarti, fontina, and pepper-jack are rich and satisfying.  For a real flavor punch try a washed-rind cheese like brie, taleggio, or pungent Époisses.  Down south, they like to use their beloved pimento-cheese spread.

Purists include only bread, cheese, and a good slather of butter — a three ingredient wonder.  But others have incorporated new flavors and innovative combinations that expand the horizons of the grilled cheese world.

Laura Downey at Fairfield Cheese likes to pair a firm Alpine cheese like  gruyère or comté with bacon, sautéed onions, and chopped cornichons on a rustic peasant bread to make a fancy and flavorful grilled cheese.  Grated Fontina Val d’Aosta grilled with prosciutto and sliced bartlett pears is a winning combo from the Italian side of the alps.  Click here for her recipes.

More old-school, Ken Skovron of Darien Cheese sticks to just cheese and bread — but what cheese!  He’s just cut open a wheel of Bärlauch Käse (Bärlauch means bear’s ears — the Swiss term for ramps) an Alpine cheese from the Oberberg Dairy in Switzerland.  Shot through with garlicky spring ramps, it’s his first pick for a grilled cheese right now as our local ramp season opens up.  Another favorite is raclette, a cow’s milk cheese from Switzerland made for melting. It’s a winter ski-lodge favorite that works in any season.

Ken’s emphasis is on ingredients, including the bread.  “The country miche from Flour Water Salt Bread here in Darien and the French miche from SoNo Baking caramelize nicely to make a beautiful crunchy crust,” Ken advised.

When I pressed him, Ken allowed that you could include a smoked or cured ham. “We have an excellent country-style locally-smoked ham in the store,” he said. He also mentioned French cured ham or German spec for a lighter touch of smoke.

Ken also suggested the possibility of including some mustard flower greens (a personal favorite), fresh herbs, or some freshly dug ramps in the spring. He cautions that, “the flavors can get blurry,” if you add too many ingredients and recommend avoiding anything sweet like the fig jam you might have on a cheese tray.  He’s all about the cheese. 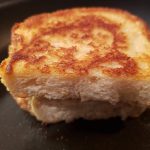 His comment about the crust makes an important point. A snappy bite (knack if you will) is a key part of grilled cheese pleasure; both the type of bread and careful toasting come into play.

Cooking grilled cheese stove-top is a little like making pancakes: the first one isn’t always quite right.  The trick is to preheat the pan well in advance to a medium heat. Put the pan on to warm before assembling the sandwiches, and it will be about right.

Skillet temperature is key too — hot enough to brown, but cool enough to let the heat penetrate and melt the cheese before the bread burns. It’s a tricky business but well worth the trouble. 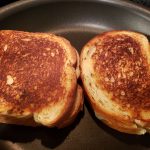 Our granddaughter Moira is already moving up on the grilled cheese sophistication scale.  Only Wave Hill Breads buttermilk white with its tangy flavor will do for her.  Once I tried slipping in a few apple slices to her dismay.  She has a ways to go.

Ken mentioned that he uses a panini press — an excellent pro tip.  It will preheat to a good temperature, create an excellent ribbed crust, and cook both sides at once.

All this comes to mind because April is Grilled Cheese Month.  I don’t know who thinks these things up, but it’s a good excuse to indulge — maybe more than once.

Next post From The Norwalk Hour: Sauvignon Blanc for the Season Ahead