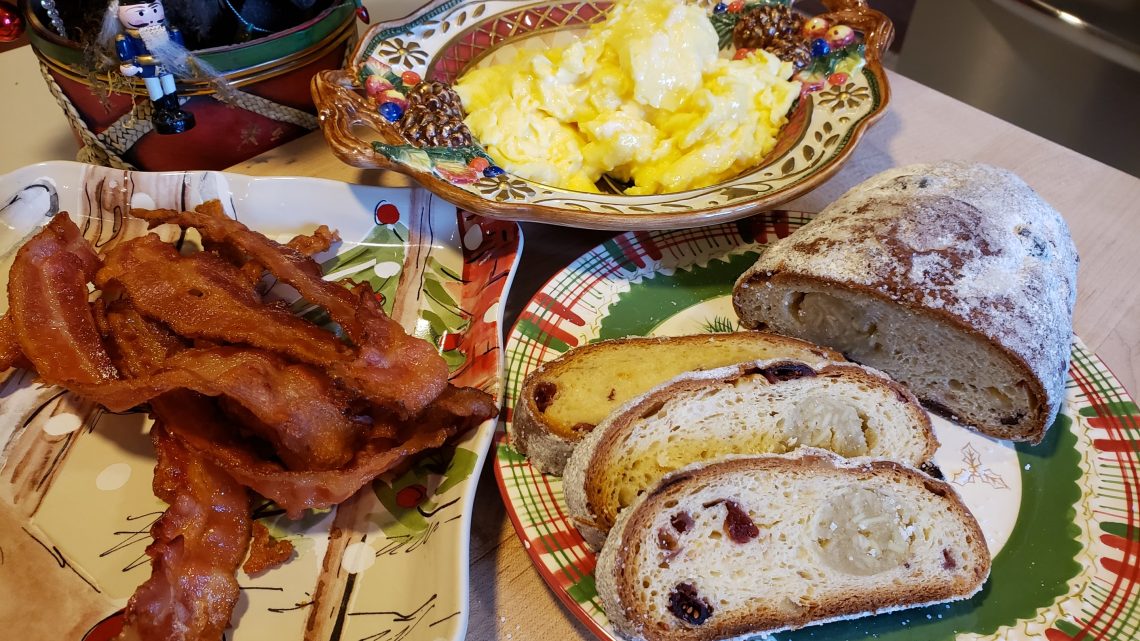 Christmas Breakfast at the Whitman's

Christmas morning tends to be either hectic or calm.  Youngsters may be up early clamoring to get at the goodies under the tree, or when the kids are older (or have left the nest), the atmosphere can be a little less urgent.

At our house there’s coffee for the grownups while we see what Santa brought and the stockings are emptied. Along the way, as we dig into the colorful packages under the tree, there’s a gradual consensus to break for breakfast.

Christmas dinner is a well-considered subject with a wide range of traditions: tried and true or innovative and experimental, but I haven’t heard much about the breakfast menu.

I thought it would be fun to find out what some of our area’s chefs, bakers, and restaurant owners have on the menu Christmas morning.  Here is what some of them had to say.

Matt Storch, Chef/Owner of the award-winning Match restaurant in SoNo,  cooks up a substantial Christmas breakfast.  His ten-year-old twins aren’t up with the sun, so the day starts with a more relaxed vibe. Thick-cut challah French toast with caramelized bananas leads to a day of feasting. If he has a piece of foie gras, that gets cooked up as a breakfast side — a step up from the usual breakfast meats.

After a busy Christmas season with a strong finish on Christmas Eve, Rob Moss, owner of Washington Prime in SoNo, welcomes a chance to sleep in on Christmas.  The adults-only morning starts not with a traditional breakfast but with a mid-to-late morning meat and cheese platter that segways into a festive caviar tasting.  It’s not a surprising menu when you think that he runs one of the best steak restaurants in the county.

I was particularly interested in hearing from some of the area’s best bakers.  Christmas is often celebrated with the traditional breads baked by these guys.

With children ages 18 months and three years, Tim Topi is up early on Christmas morning. As the owner and master baker at Wave Hill Breads in Norwalk, he’s used to being at work while we’re all asleep.  After early gift opening, a light Italian-style breakfast of Wave Hill’s fresh-baked panettone and coffee (for the grownups) before church has been his tradition in recent years.

A baker, like a farmer, has to work every day. John Baricelli spends a couple early hours at the bakery feeding the sourdough starters and the poulish for the following day’s loaves. Back at home, his kids ages 13, 21, and 32 will all be gathered for a sumptuous Christmas dinner, but the day begins with eggs, French toast, sausage and bacon — a hearty feast.  Baguette is his choice of bread for the toast — soaked overnight and then baked or pan fried.

Norbert Dudas draws on his multicultural heritage for his Hungairan Christmas breakfast. “Sometimes we have panettone like the Italians,  kugelhopf like the German side of the family, or a good challah loaf.” he said. “They all taste best if baked by your mother or grandmother.”  Since he’s a partner in Norwalk’s Cafe Dolce, a popular Hungarian cafe and bakery on Main Avenue, he can enjoy an old-world Christmas breakfast of kifli (a Hungarian croissant) baked in a milk custard with sugar and cinnamon — a little like a bread pudding

Sky Merced and his family of the Forever Sweet Bakery have hot cocoa and bagels while opening gifts and facetime-ing with out-of-state family.  When the hubbub settles they tuck into Belgian waffles, strawberries, orange juice, coffee and more hot cocoa.  The finish is some of the bakery’s cookies. After all it’s Christmas and dessert after breakfast is OK.

The menus and traditions run the gamut. The bakers tend more to a European-style breakfast of coffee and a sweet bread. The restaurant guys, on the other hand, tend to go all-out with some rare delicacies. Everyone hopes to be pretty laid back after a busy season.  They start right in again the next day.

At our house, it’s usually scrambled eggs and bacon with some sweet breads — maybe homemade cinnamon rolls or pecan honey-buns. This year we’ll also be enjoying some of the irresistible breads from the bakers who shared their menus with me.

Wishing you all a very Merry Christmas!

Next post From The Norwalk Hour: Connecting with Food Insiders in 2020

Previous Article From The Norwalk Hour: Local Bakeries offer Christmas Traditions from Around the World

From Sunday Arts and Style: Easy eating and satisfying food at the iconic Waffle House