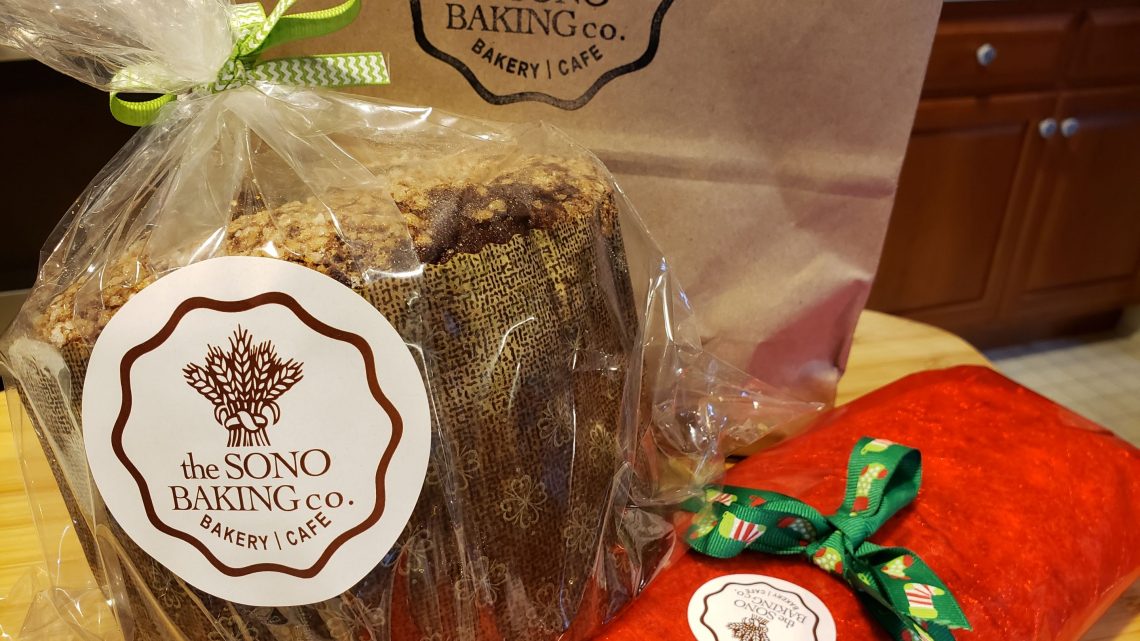 When you untie the green Christmas ribbon and pull back the wrapping of a panettone from the SoNo baking company, the rich aroma wafts out — fresh orange, dark chocolate, vanilla, and the slight tang of wild yeast.

Breads and cakes laced with exotic spices and precious preserved fruits have been a Christmas tradition since medieval times.  Flavors from afar like cinnamon, nutmeg, and allspice and expensive delicacies like dried apricots, citron, and dates were brought to Europe by far-ranging adventurers to be baked into holiday cakes and puddings.

Only the best and most valuable ingredients were used to celebrate Christmas. Each country developed its own flavors and traditions — holiday traditions that immigrants brought to America.

At The SoNo Baking Company, owner and head baker John Barricelli bakes a quartet of holiday cakes from across Europe. 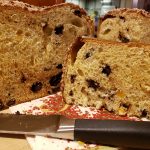 His orange-chocolate Italian-style panettone ($26) stands out.  Nothing like the boxed, store-bought examples, the vibrant orange flavor from candied orange and fresh orange zest is complemented by vanilla bean and semi-sweet chocolate. The light sourdough crumb has no commercial yeast. Mixed and fermented in three stages, its wild yeast is proofed at room temperature over three days.  “You know, everything we do here is all-natural.  Only true flavors and no preservatives,” John told me.

It’s irresistible right out of the oven but will keep all through the Christmas season.  Any leftover panettone makes a killer bread pudding for New Year’s. 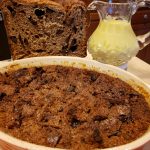 SoNo’s Dresden-style Stollen ($30) has a generous ribbon of marzipan wrapped in a yeast dough studded with candied orange and dried cranberries (Germany meets New England).  Heavily dusted with powdered sugar, it too can last the Christmas season, but I doubt it will.  “It’s a heavier dough, best eaten in small slices,” according to John.  If you have an aversion to mail-order Stollen, give John’s a try.  The experiences can’t be compared.

Persimmon pudding ($8 individual or $50 large) is an English-style baked pudding like the figgy puddings of old.  It’s only available Christmas week. Golden raisins are soaked in cognac and mixed with purée from store-ripened persimmons then flavored with nutmeg, allspice, cinnamon, and ginger to make the pudding.  “It can be 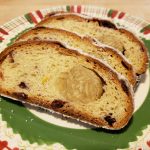 served with hard sauce or crème anglaise,” John advised, “but it doesn’t really need anything.”

A flourless chocolate Bûche De Noël ($60) decorated woodland-style with meringue mushrooms and sugar holly can be ordered with white or dark chocolate mousse filling.  The Yule Log is traditional in France and French-speaking countries including Belgium, Canada, and Switzerland. Beautifully decorated to appear as though it came from the forest, it tastes as good as it looks. 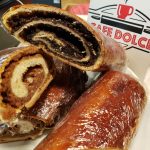 Bejgli are a Christmas-season treat in Hungary.  At Norwalk’s Cafe Dolce they’re made in-house by owner and master-baker Zoltan Bona. The pastries are filled with either ground walnuts or poppy seeds. Seasoned with honey, raisins, clove, cinnamon and orange, the rich fillings are wrapped in a thin spiral of sweet yeast dough.  I’m told that the layers of pastry and filling should equal.

In Hungarian lore, walnuts give protection against hexes, while poppy seeds represent prosperity.   A slice of either can transport you to the Christmas market in Budapest’s St. Stephen’s square in front of the Basilica. “They’re more for tea-time than breakfast or dessert,” Cafe partner Norbert Dudas shared. 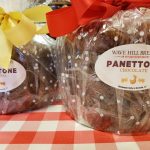 Master-baker and owner of Wave Hill Breads Tim Topi learned his craft in Italy, including a recipe for chocolate panettone.  At the Rome bakery where he trained for 15 years they made a panettone just for friends, family, and regular customers. Over the last few years, he has adapted and evolved his own recipe that comes in two flavors: chocolate-orange or traditional with raisins and candied fruit. A natural yeast starter is the foundation for both.  He uses authentic Italian Fiori di Sicilia, an extract of orange flowers and vanilla, for an old-world orange flavor.

As a dessert, Tim recommends slicing the panettone horizontally into four or five layers, soaking the layers with espresso, slathering them with nutella, and dusting the re-assembled cake with powdered sugar. Cut into slices.  “It’s the best dessert,” Tim says enthusiastically.

Both Wave Hill panettone flavors ($24) will be available in limited quantities starting December 18 at the 30 High Street bakery in Norwalk or at the Thursday Westport Farmers Market.   Advance ordering will assure your panettone.

All the bakers suggest ordering these seasonal specialties in advance. Quantities are limited and demand is strong.  As John Barricelli told me, “If you order it, I have to bake it.”  Don’t take a chance and miss out. My order is in already.

If you know anyone who would like to receive my weekly e-mails on topics like this, please pass this along and encourage them to sign up.

Next post From The Norwalk Hour: Christmas Breakfast from Food Pros

From Sunday Arts and Style: Searching for a perfect Parker House Roll