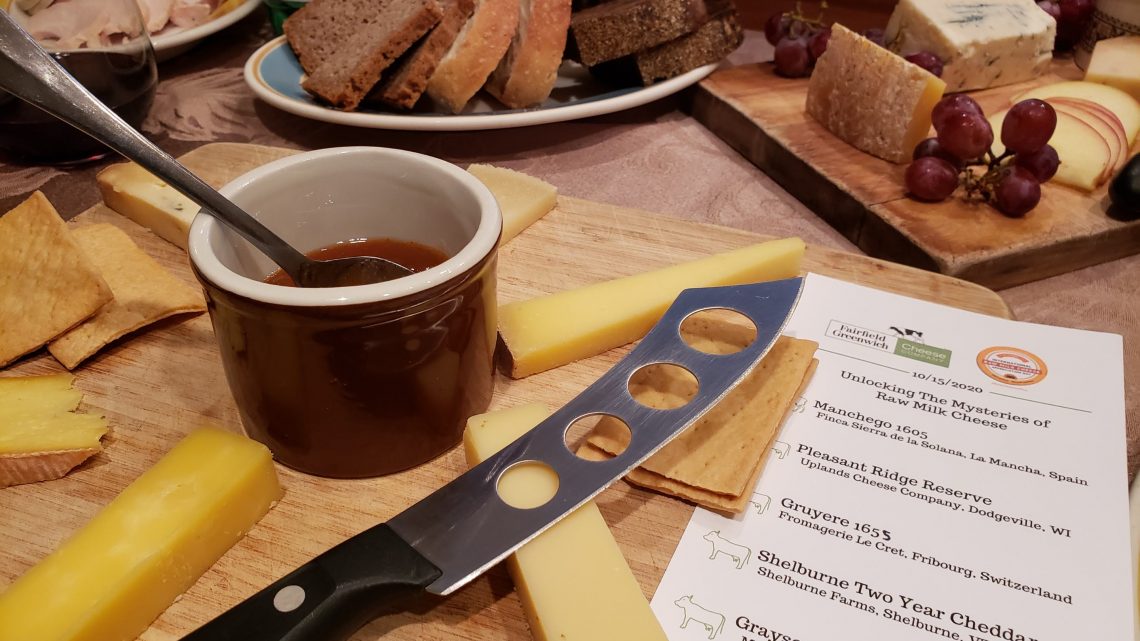 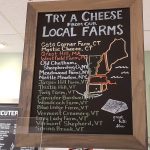 Laura Downey and Chris Palumbo dove right into the subject on the  occasion of raw-milk cheese day.  As owners of both the Fairfield and Greenwich Cheese Companies, they know a thing or two about these rare, old-school cheeses first hand.

Their popular Cheese School courses have, like so many things, moved online. This topic tapped into their close relationship with farmstead cheese makers — the ones that make sought-after raw-milk products.  They’ve visited many of these farmsteads to gain first-hand knowledge of the place and people behind the cheese.

There are a lot of misconceptions about raw-milk cheese.  Cheese made with raw milk must be aged at least 60 days to ensure that any unhealthy bacteria are no longer active, making it safe.  Those bacteria give the cheese additional flavor and complexity.  If you’ve ever had Parmesan or Gruyère, you’ve had raw-milk cheese. 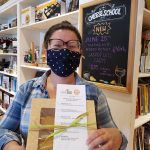 At Fairfield Cheese, on the afternoon of the online class, cheesemonger Alyssa prepared the cheeses for the tasting. While waiting, I eavesdropped on another monger helping a customer put together a cheese platter.  As he recommended and described they debated the variety and mix of cheeses to be included. It was a mini lesson in fine cheese.

That evening, Laura began the seminar by discussing the uniqueness of raw-milk cheese. Raw milk has not been pasteurized, so it’s naturally alive with bacteria that sets the cheese apart. For the most part, raw-milk cheese is farmstead cheese — made on the farm where the milk is produced like an estate-bottle wine.  It’s often a small family operation with a manageable herd of lovingly-cared-for animals.  Some of the cheeses are seasonal, only made during the fresh-grass grazing season. 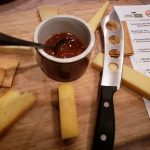 Six cheeses were included to show a broad range of styles. Manchego 1605 (the year of Don Quixote’s quest for adventure) is a rare example. Most Manchego is made from pasteurized milk, but there are still ten small farmstead producers using raw milk.  The tasters appreciated the complex flavor, long finish, and creamy texture.  “A good wine cheese,” Chris chimed in.

Since most of the cheeses were aged, I opened a 2017 Silver Spur Napa Cabernet from Jamieson Ranch Vineyards ($30).  It’s the kind of full-bodied wine dark fruit notes, lightly toasted oak, and firm structure, that pairs well with aged cheese. 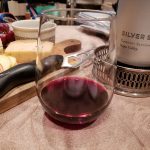 Pleasant Ridge Reserve from Dodgeville, WI is an example of the trend toward making farmstead raw-milk cheese in the U.S.  Made only in summer, this rich, flavor-packed Alpine-style cheese is the most awarded cheese made in America. It was a favorite of the tasters.

We went on to taste a small-village Swiss Gruyère  and a seldom-seen, two-year raw-milk cheddar from Shelburne Farms in Vermont.

Grayson, from Meadow Creek Dairy in Virginia was the youngest cheese in the tasting. A washed-rind semi-soft cheese, it had a pleasing yellow color from the high butterfat milk of the farmstead’s Jersey cows. The aromatic cheese, only produced in summer and aged 60 days, was another tasters’ favorite.

The evening finished with Stichelton, the only version of the iconic English Stilton-style cheese made with raw milk today.

Some national cheese makers like the Point Reyes Farmstead Cheese Co. in California are putting on Zoom tastings too. 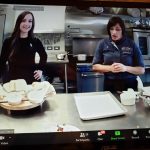 In an hour-long seminar two weeks ago, hospitality coordinator Nikki Gruss led us through the eight cheeses included in their Big Cheese mail order package ($140).  Bold Original Blue, celebrating its 20th anniversary, is their most popular offering. Bay Blue is a milder, creamier French style.

While tasting the blues I learned about the magic pairing of blue cheese and dark chocolate. Give it a try.

Buttery, tangy, Toma, an Italian-style semi-hard cheese traditionally made on small farms in Italy, comes from Point Reyes in four styles: truffled, herbs de Provence, and Tomarashi as well as the original.  The delicious Tomarashi is seasoned with Shichimi Togarashi, a Japanese spice blend containing nori, chili flakes, and ginger, along with toasted sesame, poppy and hemp seeds.  Point Reyes cheeses are available locally at Whole Foods or on line at pointreyescheese.com

Point Reyes chef Jennifer Luttrell had our mouths watering with a few quick and easy cheese-based recipes.  Her Italian-style frico was a simple mix of finely grated Tomarashi sprinkled on a sheet pan and baked until crisp. It could be broken into crackers or crumbled to top off a savory soup. She described her take on house-made pimento cheese along with their blue cheese and date dip, both part of the Big Cheese package.

My fellow Point Reyes tasters, ranging from Seattle to Maine and South Dakota to Texas savored the direct connection to the farm.  Those of us on the raw-milk seminar got the inside scoop from knowledgeable, professional mongers.  I’m hungry for more.

Next post From The Norwalk Hour: Election Cake is a Winner for Governor Lamont and the Candidates

From Sunday Arts and Style: Bean to bar is the grand cru of chocolate