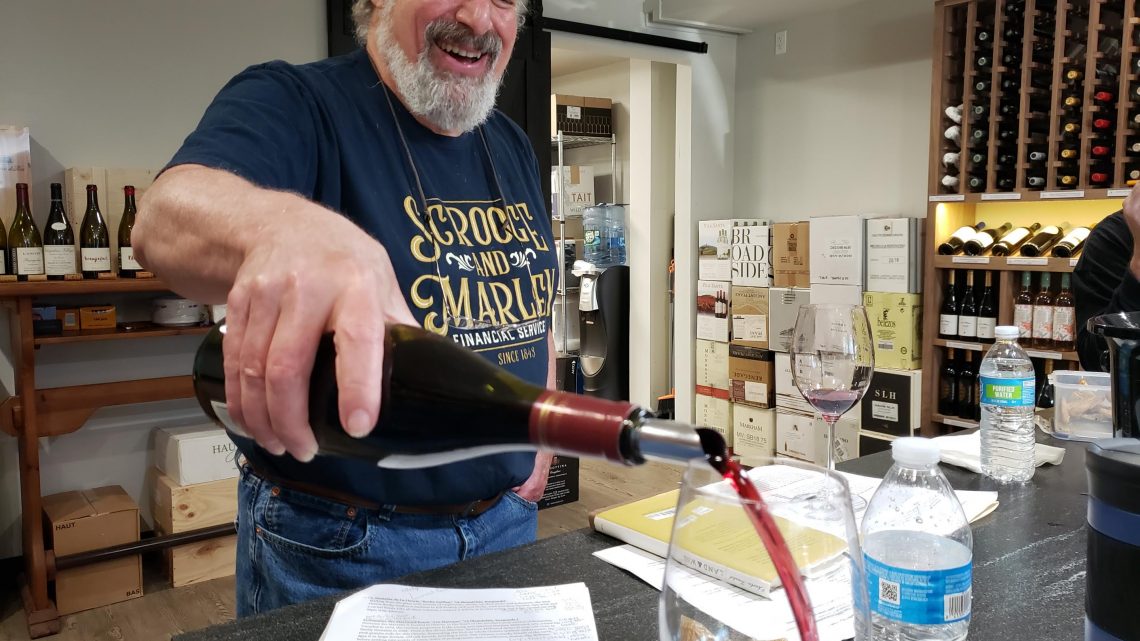 Father’s Day is this coming Sunday. As a dad, I can tell you that it should be celebrated with unreserved abandon, eclipsed only by Mother’s Day, New Year’s, and all the other federal holidays — and, oh yes, birthdays.

Still, Pops should have his day.  This year the hoopla should be even greater, since June 20 is also the first day of summer — a pretty big occasion in my book.

Food and drink are the traditional ways to honor dad, usually a gathering around a table laden with favorites that ends with a popular dessert. A special menu-appropriate wine is always a good idea. 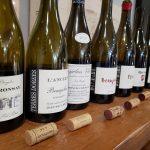 A dozen Beaujolais lined up for tasting.

This year, with the coincidence of the two occasions, I’ve been thinking about summer wines.

There is, of course, rosé.  It seemed to come out of nowhere a few years back to dominate summer imbibing. I remember when you couldn’t give the stuff away. Nonetheless, I will concede that it is a delightful summer quaff.

This year, I’d like to nominate Beaujolais as a candidate for the top summer wine. Made in Burgundy from the Gamay grape, the wine is fruit driven, crisp, and refreshing at its most basic and can rival the complexity and nuance of the sought-after red Burgundy at its peak. Insiders consider it to be one of the best values in red wine. 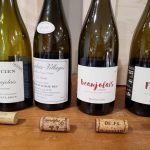 Beaujolais and Beaujolais Villages are the largest regions

Beaujolais regions are carefully described and mapped out, as all French wines are. When the label says Beaujolais, the everyday wine comes from the large area in the south of the region.  Beaujolais Villages, the next step up in quality, is smaller and further north. Next up, approaching the town of Mâcon, are the ten villages (called Crus) that make the finest wines: Saint-Amour, Juliénas, Chénas, Moulin à Vent, Fleurie, Chiroubles, Morgon, Régnié, Côtes de Brouilly, and Brouilly.  Each town, with its distinctive terroir, is named on the label without the Beaujolais designation, (you’re just supposed to know). Fleurie and Morgon are the largest Cru villages.  Although these wines are widely available, knowing the producers is important.

But why is Beaujolais a summer wine?  After all, it’s red.

The fruit-driven, slightly-tart, refreshing wine can be (and should be) served slightly chilled. Some time in front of the A/C vent or perhaps twenty minutes in the fridge will bring it just below room temperature.

In the trade, summery words are used to describe the aromas and flavors: wild strawberries, cherries, flowers, aromatics, red fruits.  When you get to the more serious Cru wines, the words broaden out to include terms that you might associate with other wine regions: plums, smoked meats, tannins, elegance, long-finish, and even suave.

This was all driven home to me at a recent tasting of a dozen Beaujolais across the spectrum of designation, style, and price.  DB Fine Wines in New Canaan regularly hosts in-depth tastings.  A dozen or so customers gather to sample the wines as they are presented by wine industry veteran Jim Winston. 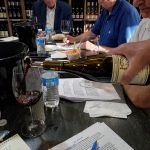 Pouring a sample to taste

Winston knows his stuff.  He is able to bring the behind-the-scenes story of grape, place, and wine to life, while narrating vivid, clear, and enticing descriptions of the wines.

Last week ten of us gathered to taste through four Beaulolais and Villages wines along with eight from the Cru regions. Prices ranged from $16 to $45 with seven of the group under $25.  I can’t begin to list and describe each one, but you can see the full list on the DB Fine wines facebook page.

As is his habit, Winston selects three wines at the end of the evening for Win, Place, and Show — personal decisions based on his lifetime of tasting.  He admitted that this group was particularly strong and revised his picks a few times before committing to the final standings. 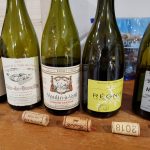 The Régnié (second from right) was Winston’s top pick.

Win: An exceptional and rare wine from the small Cru of Régnié made by Charly Thevenet ($36).  Place: Domaine de Fa, Fleurie ($24) a rich, slightly-tannic age-able wine. Show: Domaine des Marrans, Morgon ($24) with a “wild strawberry nose and fresh fruit flavors.  (I’ll confess I ordered a few of this one.)

So for Dad, I suggest a relaxing day of favorite activities, a good meal, and a bottle of Beaujolais.  For the gift that keeps on giving, consider getting some extra bottles and making it your summer wine. 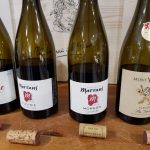 Next post From The Norwalk Hour: How Do You Want Your Eggs?

Previous Article From The Norwalk Hour: A Rainy-Day Crêpe Party is a Hit with Kids