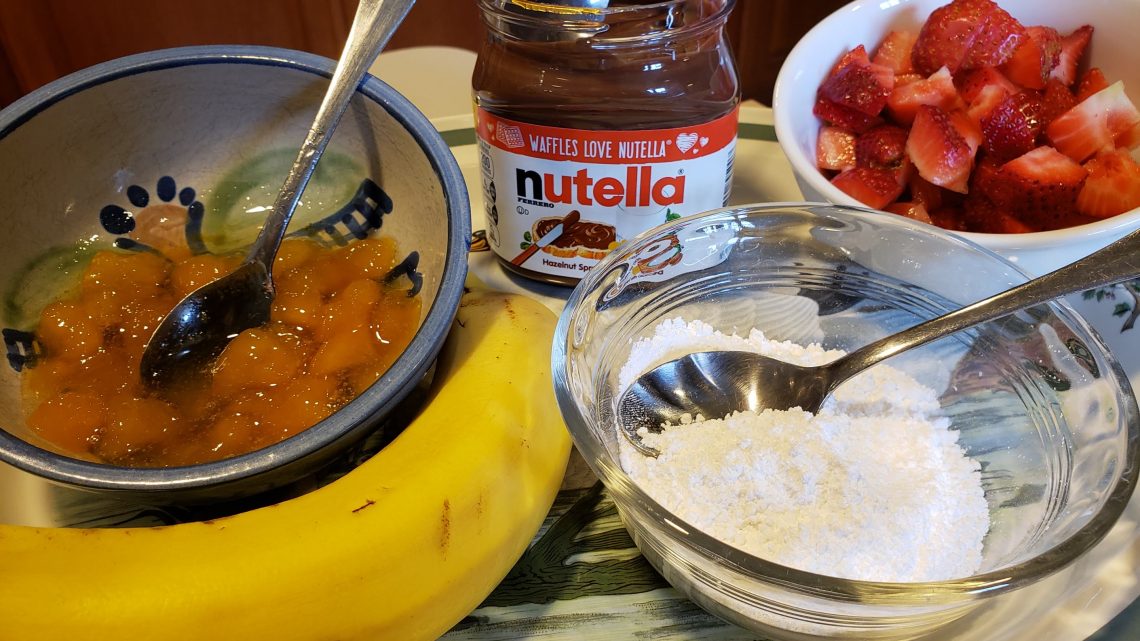 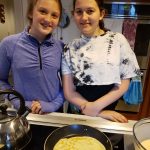 Fresh strawberries, Nutella, peach jam, or just sugar and butter — these were the tempting toppings at our impromptu rainy-day crêpe party.

The gloomy sky — close on the heels of a cold and rainy weekend — was the kind of day to either clean the closets or have a fun cooking project. The closets lost out.

If you can round up a few kids, their enthusiasm for sweet crêpes will bring some cheer to a dreary afternoon. They love to mix-and-match the toppings and fillings for the easy-to-make thin pancakes.

Crêpes are simple to make but impressive to present. The batter is easy to whip up from ingredients usually on hand. Cooking the crêpes takes a little knack.  But like their close cousins pancakes, you’ll feel like a pro after the first few. 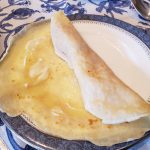 We rounded up a gang that included Marsha’s sister Jana Janeway and her husband Whitney. Fortunately, two of their granddaughters were visiting. Naomi and Genevieve Currie provided the requisite kids.  It’s the youngsters that really dig into the toppings and show some flavor-combining creativity.

Marsha and Jana immediately went for the well-remembered butter and sugar combo of their youth in France. There were some complaints about the lack of crunch in the rolled-up crêpes, but I think less butter and more sugar would achieve the desired result. 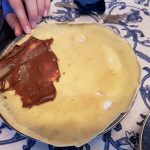 Genevieve slathered on Nutella, folded hers in quarters, and generously sifted powdered sugar on top.

Nutella, an Italian hazelnut and chocolate spread, is popular around the world. Its origins in the town of Alba date to the post-war era when chocolate was scarce and local hazelnuts plentiful.  The popular brand originated in 1963 and now absorbs a substantial portion of world-wide hazelnut production. It’s a favorite of children of all ages.

Everyone had at least two crêpes, so there was plenty of opportunity to try various filling combinations. Diced banana with Nutella was a good one. Sweet and flavorful peach jam was fine by itself. In fact, we 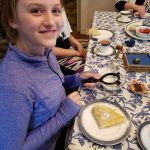 finished it off and had to bring out some store-bought strawberry preserves.

The crêpes are made from a simple unleavened batter.  The basic recipe calls for a cup of all-purpose flour, two eggs, ¾ cup of milk, ½ cup of water and two or three tablespoons of melted butter. Optional extras include a pinch of salt, a tablespoon of sugar (suggested for dessert crêpes), and a teaspoon of vanilla.  No baking powder or soda.  Crêpes don’t puff up.

Unlike batter for pancakes, crêpe batter should be smooth. Some recipes call for whipping it up in a blender, but that’s an unnecessary mess. I learned from a Jacques Pepin video that 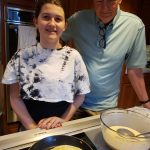 adding a small amount of liquid to the dry and mixing it well, creates a smooth lump-free paste that can then be thinned out with the remaining liquid.  It should be pretty runny. Simple, easy, and no extra cleanup.  He also efficiently melts the butter in the cooking skillet, saving a separate melting step.

There was a time when chefs carefully guarded their well-seasoned steel crêpe pans, but non-stick skillets have replaced them.  A ten-inch pan is ideal for making dessert crêpes. Let the pan get fully heated on a medium setting. Put about a quarter cup of batter on the side near the handle and swirl it around to cover the bottom.  A few gaps are OK. If the crêpe seems thick or won’t spread to cover the pan, add a little more water to the batter. 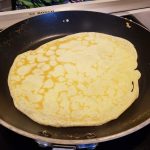 Cook the first side until it is lightly browned in a lacy pattern and then flip it for a minute more on the other side.  Like pancakes, the first one or two aren’t always quite right and can be eaten by the cook. Once the pan settles in, the cooking is easy. The batter may need to be thinned with a little more water as it rests while you cook.  The guests like to stand and watch the cooking until the first batch is ready to eat.

Our rainy day was transformed by the festive magic of crêpe cookery. The only problem?  We all ate too many and spoiled our dinner.

Next post From The Norwalk Hour: Beaujolais Honor Dad and Celebrate Summer

Previous Article From The Norwalk Hour: Restaurants are Better than Ever