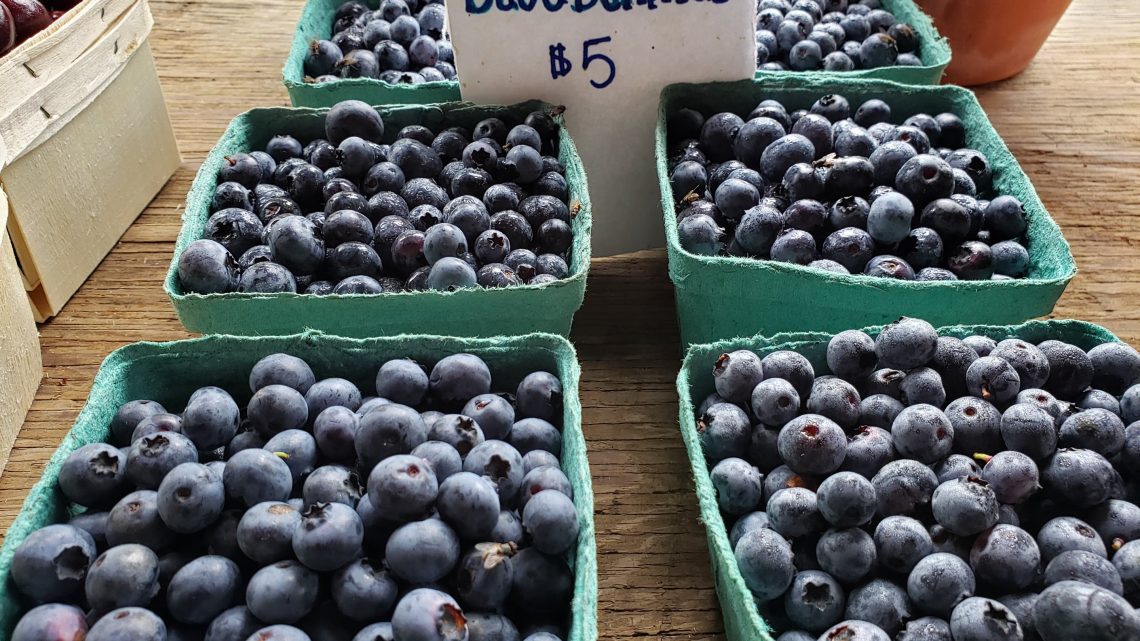 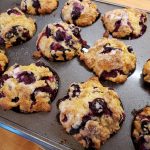 “Homegrown Blueberries!”  I can’t resist that sign when it’s stuck in the back of a basket of just-picked fruit.  Somewhere between navy and midnight blue, they stand alone from the early summer red berries and the later blushing stone fruits, a welcome change as summer progresses through the fruit harvests.

Muffins, for me, are the fulfillment of the blueberry’s potential. The berries are great on cereal, simmered into a sweet sauce, or baked in a slump, cobbler or buckle.  But a good blueberry muffin rings my bell.

In Boston, they took their blueberry muffins pretty seriously.  Department stores (remember them?) and hotels (haven’t been in one of those for a while either) jousted for the title of the city’s “Best Blueberry Muffin.”

In 1985 New York Times food writer Marian Burros described the muffins from Boston’s swish Ritz Carlton Hotel as the best in the city.  Her article earned a missive from a reader contradicting her and promoting the Jordan Marsh department store muffins as the best. The mixing spoon gauntlet had been thrown down.

While that may have been a long time ago, a highly-recommended muffin recipe still gets my attention.  Recently when the baskets of berries showed up on farm-stand tables, I got the itch for a blueberry muffin taste-off. Plans were laid to try the competing Boston recipes plus one from SallysBakingAddiction.com that I’ve been baking for the last few years.

It’s surprising how much variation there can be in muffins. Just in these three there was butter creamed with the sugar in one, melted butter added to the dry ingredients in another, and a whack of sour cream included in the third.  There were also significant variations in the ratio of sugar to flour and the use of vanilla.

I was eager to bake and learn. 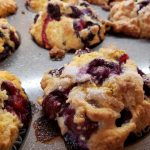 The Ritz Carlton recipe, as you might imagine from a professional kitchen, made a lot.  It called for 3 ½ cups of flour, only ¾ cup of sugar, 4 to 5 cups of berries, and no vanilla. This one, with the melted butter, was the easiest to make: measure, sift, gently stir the wet into the dry and fold in the berries. Since it made so much, I portioned out a dozen muffins and put the rest into a loaf pan for slicing.

The stiff batter produced nubby upright muffins with a craggy surface.  The inside was finely textured, tender, and crumbly.  The ratio of berries to cake was high. As you would expect, they were not sweet, but had lots of berry flavor. 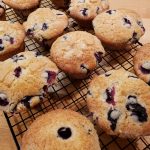 The recipe from Jordan Marsh took the traditional path of creaming the butter and sugar.  1 ¼ cups of sugar in this case were paired with two cups of flour and an equal measure of berries. The method called for smashing ¼ of the berries with a fork to release some flavorful juice.

The batter was much looser, flowing into “muffin tops” during baking.  Marsha immediately commented that the muffins were sweet, the way she likes them. The vanilla jumped out at her in the second bite.  With lots of berries, the muffins tended to fall apart. 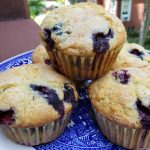 The final recipe came from SallysBakingAddiction.com. Reflecting today’s taste for more complex flavor, it included brown sugar along with the white, more vanilla, and half cup of sour cream.  Slightly fewer berries were hardly noticeable.

These had a top between the first two, fairly smooth, but with some cracks and less tendency to overflow the cups.  The cakey texture held together but was still tender.   The extra ingredients added flavor, but the blueberries still punched through.

A teatime gathering of tasters evaluated the muffins in a blind tasting.  All of the muffins had plenty of berries and were finished with a sprinkle of sugar on top. 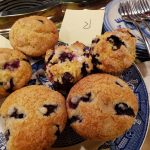 Calvinist in their plainness and restraint, the Ritz Carlton muffins were classic old-school New England in their simplicity and emphasis on the basics.  “Good flavor, chunky, and not as sweet,” were some of the comments. “It’s a good breakfast muffin that could be toasted with butter.”  They were one taster’s favorite.

The Jordan Marsh examples were described as having “good texture and flavor with a crunchy top, and very pleasant.”  For some, they were the sweetest of the three, but one taster (with a sweet tooth) called them, “not too sweet.”

The overwhelming favorite was Sally’s. The tasters liked the pronounced vanilla, richer flavor, and moist, delicious, cakey texture. Four out of the five made this their first choice.

Forced to pick a favorite, the tasters emphasized that all the recipes made delicious muffins, each with their own claim to fame, but all winners.  They’d be happy with any of the flavorful blueberry treats for breakfast or a snack. That’s the beauty of baking in blueberry season. 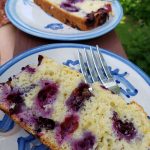 Next post From The Norwalk Hour: Cooking involves some trial and error

Previous Article From The Norwalk Hour: There’s never been a better time to savor a local brew