From The Norwalk Hour: Homemade tamales, a family Christmas tradition 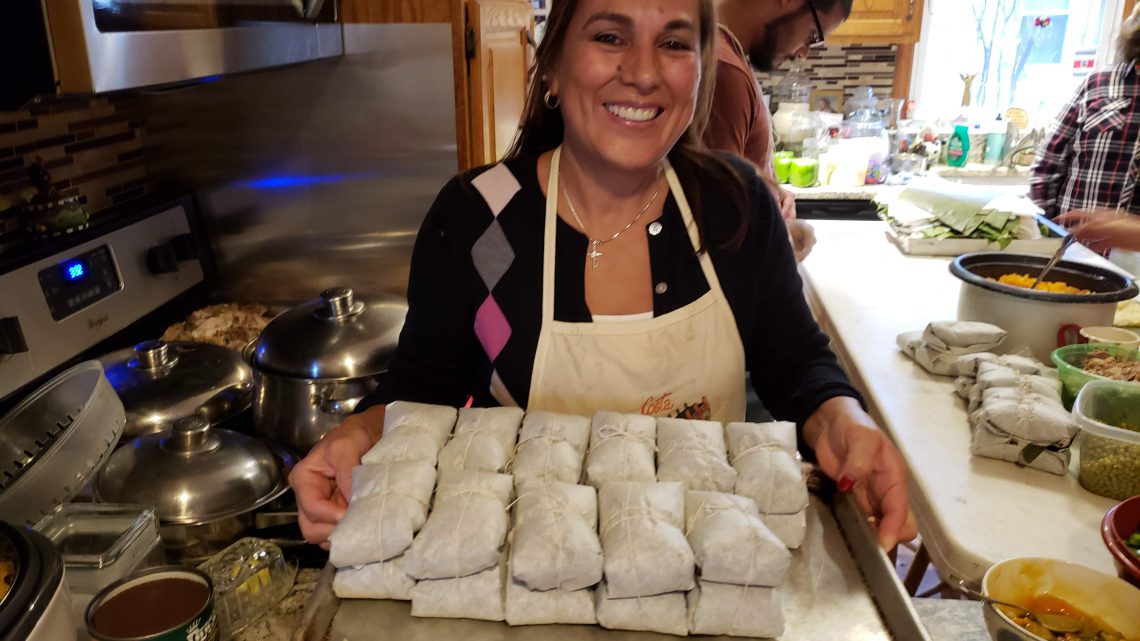 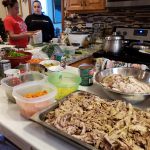 Kelly Gonzales and Laurel Arias with the tamale fillings.

The Arias family gathered in Nellie and Rafael’s crowded kitchen for the annual making of their Christmas tamales. Every December the family comes together to wrap masa, pork, and vegetables in banana leaves, making the tamales in a tradition that goes back generations.

Rafael explained that everyone in Costa Rica would be doing the same thing at this time of year – from the Pacific coast, into the central mountains, and back down to the Caribbean shores. On his phone he showed us a picture of his mother’s family starting the process with a freshly slaughtered hog. Those tamales would be prepared around a traditional wood-fired stove.

But at this house, the work began the day before with the slow simmering of a leg of pork. The shredded meat goes into the tamale, but the flavorful broth and fat are just as important. 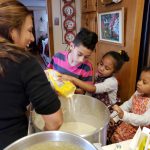 The strained well-seasoned broth becomes the cooking liquid for  finely-ground white cornmeal that will become masa – the rich, golden basis of the tamale. Daughter Laurel Arias added pork fat pureed with potato to the broth giving it a silky texture and rich flavor.

The cornmeal is slowly shaken and then stirred into the room-temperature stock – a job that teaches patience to the grandchildren.  As he tried to add the meal in a steady stream, Kelly Gonzales’ son, 12-year old Jayce, asked Nellie, “Why are you doing that, Abuela (Grandma)?” She explained why, passing on the oral tradition of their family tamales.

Although she’s been making tamales all her life, Nellie had still placed a call to her mother in Costa Rica that morning, just to go over the details one more time. Had Great Grandma been here as usual, there would have been four generations in the kitchen sharing the work, learning the method, and building family bonds. 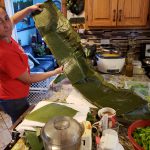 Meanwhile, daughter Kelly was preparing the banana leaves. Each six foot long leaf has to be trimmed, torn into a rough square, cleaned, and placed on a sheet of parchment paper.   Christine Butler’s daughters Nyla, five and Nina, three, helped as best they could with stacking.

Two large pots of seasoned rice stood ready with all the other ingredients lined up along the work table ready to be added to the tamales: shredded pork, carrots, peas, peppers (red and green), chickpeas, cilantro, and mustard-pickled vegetables.

But the centerpiece of the tamale is masa – the focus of activity for a good part of the afternoon.  When it was fully mixed, Rafael and Jose Gonzalez put the huge pot on the fire to be stirred with a four foot long wooden paddle until cooked and thickened. 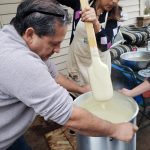 Everyone but the two little girls put in some time with the hard work of the paddle, keeping the masa constantly moving, scraping the bottom to prevent burning.  Jayce took his first turn, the beginning of a lifetime of stirring masa for Christmas tamales. At the end, Rafael had to put some muscle into the final stages of thickening.

Christine and Kelly kept tasting, adding salt, spice, and pepper sauce to adjust the seasoning.  More broth and butter went in to get the ideal consistency. Nellie, matriarch of the afternoon, had the final say on flavor and texture.

As the steam rose and the masa thickened, everyone leaned in to see the first boiling bubble, a sign that the masa was cooked and the assembly of the tamales could begin. Once the masa was done, events moved quickly. The tamales – all 240 of them – must be made before the masa cools. 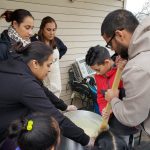 Waiting for the boil

Every family member, from the oldest to the youngest, had a job as the tamales moved down the assembly line: first a pillow of masa on the leaf, then pork, rice, vegetables, and the seasonings.  It was a smooth operation with lots of family banter moving easily back and forth between Spanish and English.

At the end of the line, Nellie folded the packets into a tight, leakproof, uniform rectangle with a practiced technique acquired over a lifetime. Rafael and Jose tie two tamales together in packets for cooking.  “Make sure they have a waistline,” was the admonishing advice given by Great Grandma over the years. “Tie them tight.”

Tamales, an ancient food dating to pre-columbian Aztec and Mayan civilizations, are a Christmas tradition in Costa Rica, as well as across North, Central and South America and parts of the Caribbean. 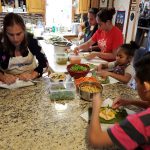 Other places may use corn husks for wrappers. The filling can be made with pork, beef, chicken, or even be meatless. Each family has its own recipe, usually unwritten, for seasoning and ingredients, passed down from mother to daughter.

The tamales are shared around the family and given as gifts to friends and neighbors. Often enjoyed with a steaming cup of coffee, each one is a packet of flavor from home made with care in the spirit of Christmas – expressions of a long-standing tradition and strong family bond. 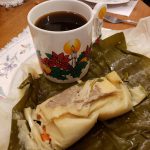 Next post From The Norwalk Hour: Some favorites from a year of eating well

Previous Article From The Norwalk Hour: Holiday shopping made easy