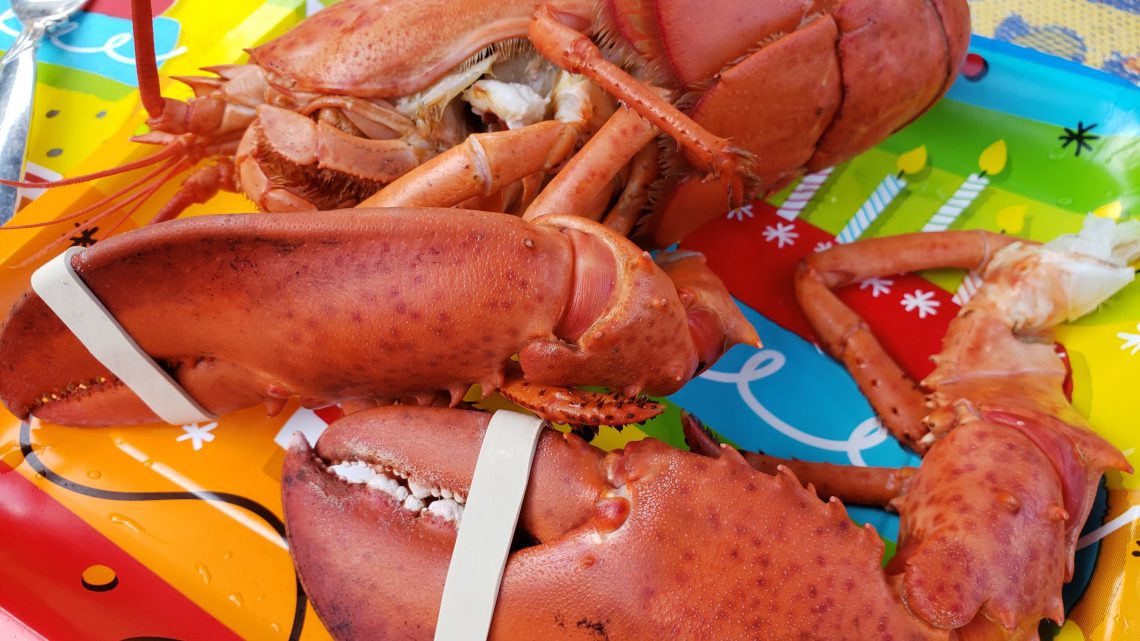 “Who’s going to put these guys in the pot?” came the question from the kitchen.  If you’re going to cook lobsters at home, someone has to do the deed, the first step on the path to a delicious dinner. 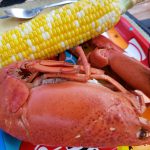 Marsha and our daughter Charlotte wanted no part of it and kept the kids away too. It was up to Cameron and me to get the job done. He held the bag open while I plunged each lobster head first into the boiling water, knowing that twenty minutes later, we’d be eating well.

Lobster is the centerpiece of our family’s favorite special-occasion dinner — a birthday this time.  Served with local sweet corn and sliced vine-ripened tomatoes, this seasonal trio has been enjoyed up and down the New England coast for generations. 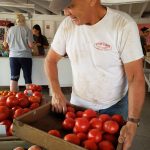 Vine ripe tomatoes are part of the lobster feast

For New England colonists, lobsters were so plentiful and disdained that they were fed to prisoners and considered poor man’s food.  Native Americans and early settlers used them for fertilizer and fish bait. Heaps would wash up on the beaches, free for the taking.

Advances in commercial canning and transportation brought lobster meat to the American heartland, where it became a prized delicacy. As Americans vacationed on the New England coast, they acquired the taste for fresh lobster that got us where we are today.

In the mid-1990s there was a thriving commercial lobster fishery in Long Island Sound.  In 1998, 3.7 million pounds of lobster were landed from local waters, but in 2015 just 200,000 pounds were trapped. Warmer waters along with over fishing are the best guesses for the crash of the fishery.

Lobstering is much better in Maine where 130 million pounds of lobster were harvested in 2016 (a recent peak) thanks to cooler water and long-standing conservation practices that protect breeding females.  Even so, the Maine lobster industry is keeping a close eye on rising water temperatures.

At the same time, Canada’s thriving lobster fishery is pulling in about 200 million pounds annually, a good deal of which is exported to China where lobster is a sign of prosperity.  But recent tariffs are impacting this market.

Boiled or steamed, a bright red whole lobster is a rewarding challenge to eat. I go for the claws first, ripping them off, cracking the joints, and extracting the meat from the pincers. On a lucky day I’ll get both top and bottom pincer meat out of the shell intact.

The tail is next.  Snap it off, break off the end fins, and push the whole meaty chunk out in one piece. After that, it’s a question of scraping the coral (if any) out of the body and using my teeth to squeeze the sweet meat out of the legs.

If you go for the tail first or alternate claw, tail, claw, that’s OK. There’s no one right way to get at the delicious meat. Part of the fun is to tangle with the shells to get it all.

All this involves a good deal of melted butter and lemon. I won’t even talk about the mess. 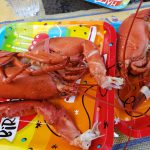 Lobsters turn red because of a pigment called astaxanthin that is released by the heat of cooking.  Occasionally, you may see an albino lobster that is grayish white before and after cooking but still tastes good. Blue lobsters are pretty rare.  I’ve only seen a couple over my career.

Lobsters shed their shells as they grow. A soft shell lobster is a recent shedder that will have extra room for the lobster to grow inside the claws.  In hard shell lobsters, the meat is tightly packed, giving the impression of more value. The hard shells can be more brittle and easier to crack open.

Baked stuffed lobster used to be a popular restaurant item. The lobster was split open and the body filled with a seasoned bread crumb stuffing, sometimes with crab meat added. Lobster Newburg is another bygone presentation. The lobster meat was mixed with a cream sauce enhanced with sherry and packed back into the shell.  Very rich. 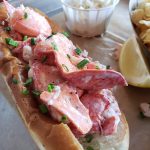 Lobster Mac and Cheese has become popular in recent years. It’s a mix of down market and upmarket that doesn’t make much sense to me. The delicate flavor of the lobster is easily overwhelmed by sharp cheese.

After boiled lobsters, a lobster roll is the most often seen presentation these days.  The best ones have a lightly seasoned dressing. Mayonnaise with a little lemon works just fine. They should be served in a New England style cut-sided hot dog roll that has been buttered and toasted. SoNo Seaport overlooking Norwalk Harbor along with Brendan’s 101 in Rowayton are known for delicious lobster rolls. They’re available for take out at Stew Leonard’s. 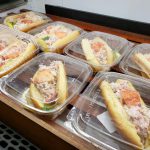 Connecticut has its own lobster roll style. Warm lobster meat is packed into a toasted roll then bathed in butter. Knot Norm’s in East Norwalk is the local go-to for if this is your preference.

At home or at a restaurant, boiled whole or in a roll, when you’re eating lobster, you know it’s a special occasion.

Next post From The Norwalk Hour: American Bounty on the Hudson at the Culinary Institute of America