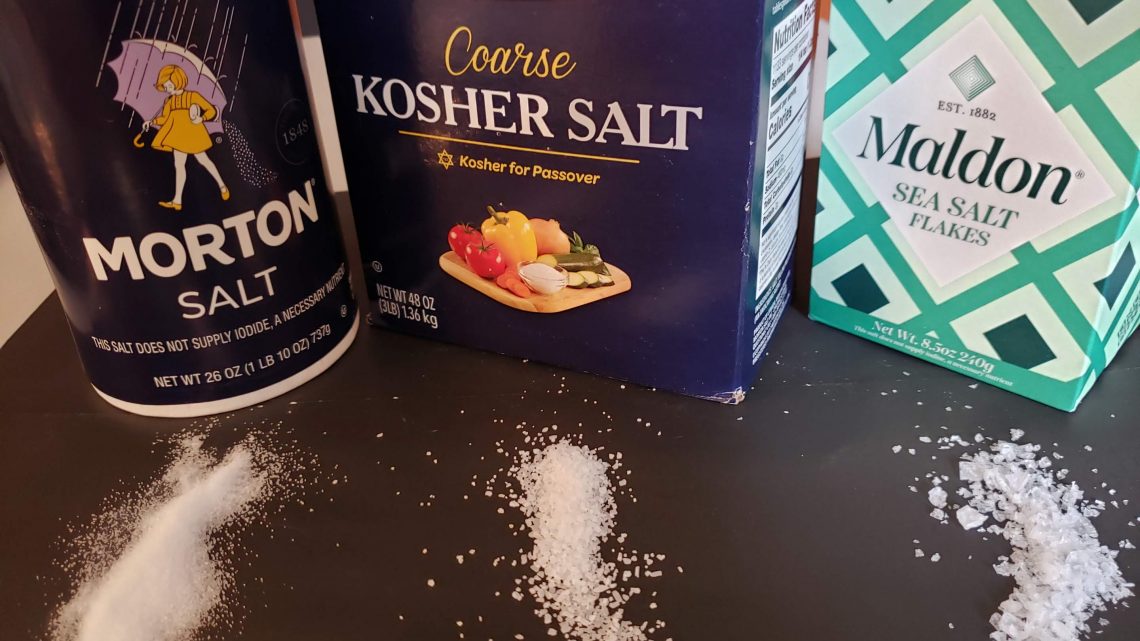 “Pass the salt,” is a commonly heard request here and around the world. Salt is so ubiquitous that its chemical name, sodium chloride, and formula NaCl are probably the most widely known terms from the esoteric field of chemistry.

It’s essential to cooks and essential for our existence. Try cooking anything without it.  Used today as a seasoning for everything, it has always been a necessity for food preservation. (Think salt cod, corned beef and country ham.)

It’s also a requirement for the human body to function properly.  Salt is so necessary that it’s been a reliable source of tax revenue for governments starting with the Chinese in 300 BC.

Lately, salt has gone upscale.  Instead of just round boxes of table salt and large sacks of industrial ice-melting rock salt, there are now salts from around the world in a range of colors, flavors and shapes. 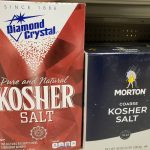 Kosher salt came into common kitchen use when it became known as a “chef’s secret.”  But why do they use it? Isn’t plain old table salt good enough?

Kosher crystal shape varies from brand to brand.  Each one will yield different amounts by weight when measuring by volume.

In the February 2022 issue of Fine Cooking Magazine a recipe for Preserved Lemons measures salt three ways: 1 ⅞ oz. of kosher salt; ⅓ cup of Diamond Crystal; or ¼ cup of Morton’s.  Bon Appetit magazine has taken to including two kosher salt measurements, depending on brand, in their printed recipes.  You can see where this gets tricky.

Fine table salt is a much denser table salt than either kosher brand.  When measuring table salt, cut the amount by half if the recipe specifies kosher.

Kosher salt’s other selling point is that it’s pure.  Table salt has iodine added.  Mixing a tiny amount in our everyday salt beginning in the early 20th century virtually eliminated the then-common occurrence of thyroid disease. It was a public health miracle.  Table salt may also contain an anti-caking agent to keep it flowing.

Coarse kosher salt was originally developed to “kosher” meat, drawing blood to the surface of the meat in compliance with kosher law. It’s popular  in canning and pickling where large amounts are used because of its lack of additives. 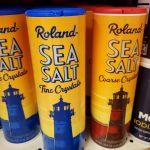 Some say that they can detect bitterness from the additives. My taste buds, after a lifetime of use and abuse, cannot pick that up.  Flavor-wise, it’s all the same to me.

Sea salt is also common in kitchens these days. Evaporated from seawater, the salt contains minerals that add flavor and color. Sea salt comes in a range of textures and shades.  Fine sea salt, the same consistency as table salt, can be used in equal measure.

Other sea salts may be coarse or flakey, white or gray.  Fashionable pink salt is mined high in the Himalayan mountains of the Punjab.  Fancy salts are usually used as finishing salts, sprinkled on a dish just before eating. 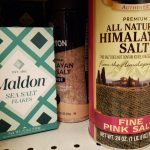 I’m partial to Maldon sea salt from England for finishing.  The large flakes add a random crunch and an occasional salty tang for an unexpected burst of flavor. A sprinkle doesn’t over salt the food, it just adds some pizazz.

I don’t deny the mineral flavoring in sea salt, but I do question it’s use in some circumstances. Blame my taste buds, but I don’t think the delicate minerality comes through when sea salt is used to season a pot of stew.

Three salts are plenty for my kitchen: table salt in the round blue box, kosher salt for sprinkling, and flakey Maldon sea salt for the finishing touch.  You can agree with me, or “take it with a grain of salt.”