From Sunday Arts and Style: The chef’s art flourishes at Millwright’s in Simsbury 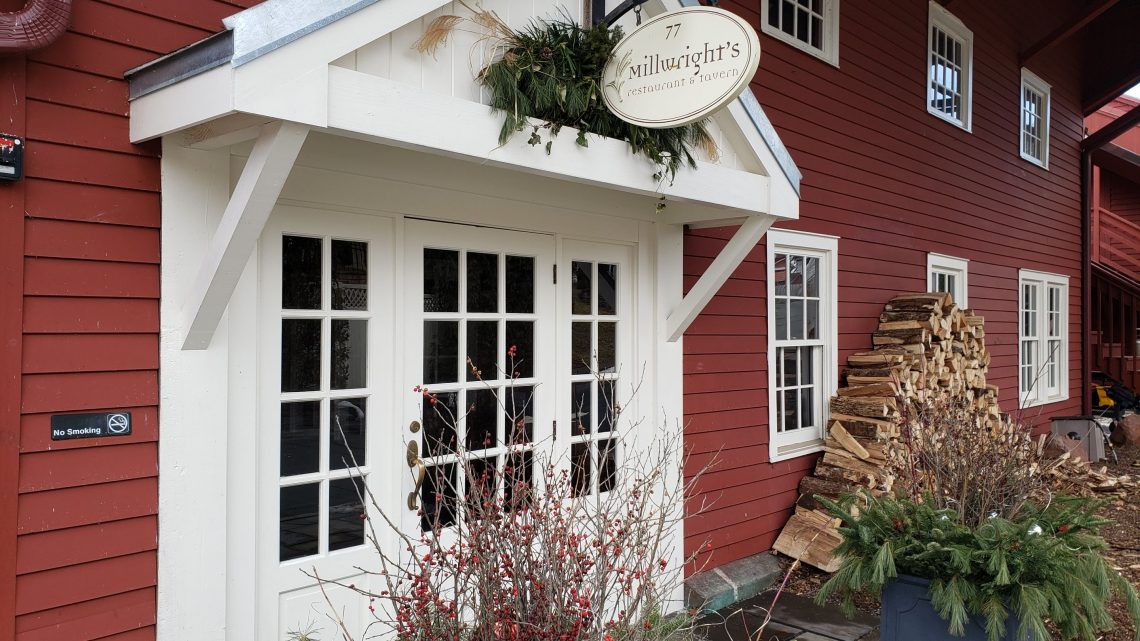 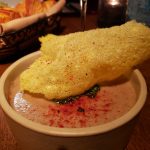 The rice crisp floated above my roasted mushroom soup ($11.50) like a swooping Frank Gehry roof.  I snuck under the eaves to get a spoonful of the silky, flavorful soup. Breaking off a corner of the salty, vadouvan seasoned crisp revealed a dab of zippy herb salsa – the perfect foil to the rich liquid. The mix-and-match flavors made each bite an adventure.

The chef’s art, at its essence, is the combining of flavors so that the sum of the whole is more than its parts. Tyler Anderson at Millwright’s in Simsbury is a wizard at this.  His masterful cooking technique combined with a strong sense of color and texture elevate the intense flavors to create some pretty impressive food. 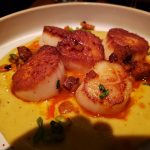 The seared scallops ($31.50) main course was just as inventive as the soup. Perfectly browned scallops sat in a puddle of thick potato-leek chowder.  Spicy, crunchy chorizo hash was scattered around the scallops. Pepper stew was splashed here and there.  The two joined in a salty-sweet dance with the scallops and chowder.  A bite with this, a bite with that – each pairing brought out a different facet.

Marsha couldn’t resist one of Anderson’s more fanciful adaptations of New England cuisine: tapioca custard with flavors of clam chowder ($14.50).  The appetizer was an island of pearl tapioca topped with tender slices of celery and shucked baby clams surrounded by a briney cream.  It was a hit. 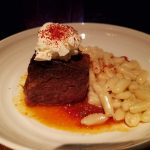 Her chunk of boneless braised short rib ($36.50), looking at first glance like a center-cut filet mignon, was fork-tender and richly-flavored. It sat in a pool of light but robust arrabbiata sauce beside a mound of cavatelli. In another of Anderson’s flavor twists, the beef was topped with a swirl of citrus ricotta that looked like it could be icing on a cupcake.

Since we’re both suckers for bread, we had to have the warm, flaky  johnny cakes with honey, black sesame, and sea salt butter. Our very professional waiter, Ron, offered seconds on butter before we had a chance to ask. 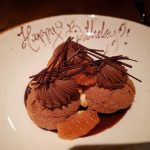 Millwright’s pastry chef, Kristin Eddy, was named “Pastry chef of the year” at the 2021 CRAzies Awards, given annually by the Connecticut Restaurant Association, so of course we had to share a dessert.  The chocolate cream puffs ($12) filled and topped with coffee ganache and decorated with hazelnuts, chocolate curls and orange slices was a winner.

Did I mention that Millwright’s was named Connecticut restaurant of the year at the CRAzies?  They’ve all got game there.

Fortunately, Anderson has a fantastic showcase for his cuisine. The restaurant occupies an historic mill 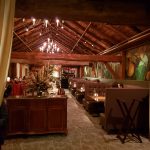 building in Simsbury where the Hop Brook slides over a waterfall as it rushes down to the Farmington River.  The post and beam joinery, water views, and stylish decor are a comfortable blend of historic and contemporary elegance.

Simsbury is a colonial town (incorporated 1670) between Avon and the Massachusetts border on Rt. 202. Since it was about an hour and half from home, we decided to make a night of it and booked a room at the historic Simsbury 1820 House. Our large room held a high four-poster king bed, a full size couch and a gilt-framed mirror that took up a whole wall. 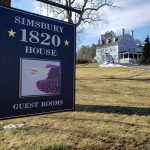 The Inn is filled with water color paintings of local scenes and furnished with antiques.  In the charming parlor the next morning, we chatted with some visitors from Boston about places to eat and things to do in the area.

Simsbury is dotted with traditional white-steepled churches and colonial homes.  Metro Bis, a long-established destination restaurant, is catty-corner across the street if you’re in town for more than just dinner.

We had been directed to Popovers Bistro and Bakery for their unique breakfast, lunch and brunch overstuffed popovers.  Unfortunately they were taking a few days off, so we missed out.

After a walk around town, we headed north to Granby, then down to Bloomfield and finally through West Hartford.  On the way home, we discussed possible dates for our next visit to Simsbury and more good eating.

Next post From Sunday Arts and Style: The fascinating flavors of collector bourbon.

Previous Article From Sunday Arts and Style: Bean to bar is the grand cru of chocolate