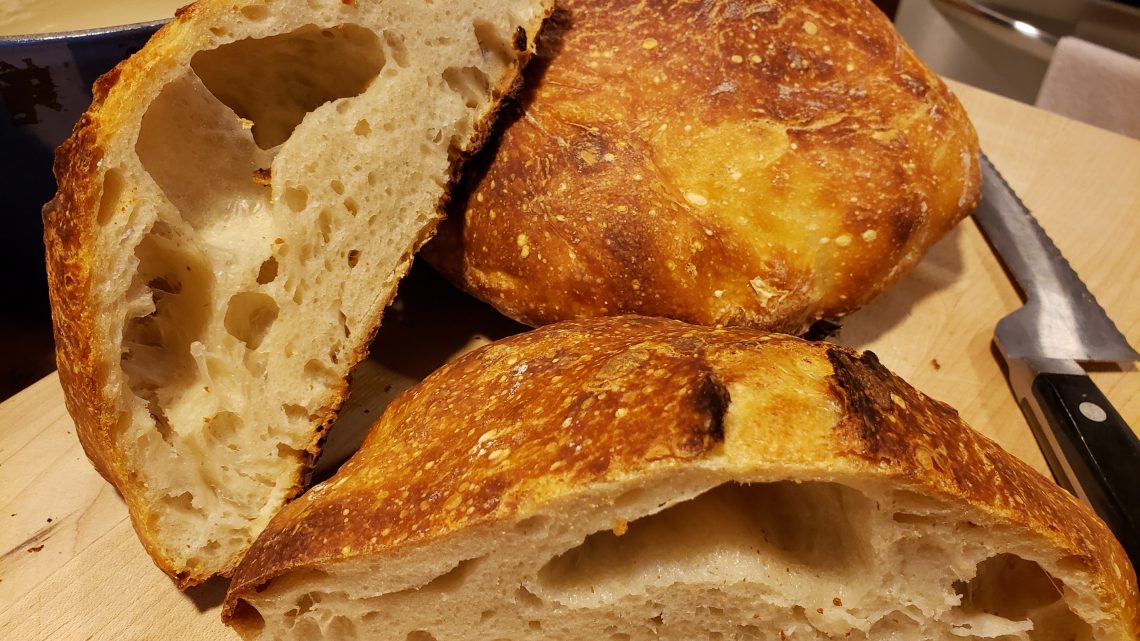 I thought my sourdough starter was vigorous, strong and ready to use, but I may have been mistaken.  My loaves, with a dark crisp crust and lovely sourdough bread aroma, didn’t really inflate with the classic open, full-of-holes texture that the pros get. It was disappointingly dense. 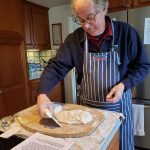 They say that the hallmark of a professional is to make a hard job look easy. I now know that’s true of bread bakers.  I mean, how tough could it be? Flour, water, salt; mix-mix-mix; let it rest; then bake. It turns out there’s a lot of technique, knowledge, and experience involved in producing good-looking, well-textured, naturally-leavened loaves. I should have known.

I followed Emily Christensen’s recipe from thekitchn.com.  Her method for sourdough starter had worked, so I stuck with her for bread. I should have been worried when the detailed instructions printed out on six pages with 25 steps. The prep time was loosely pinned at 24 to 48 hours.  I did about 26 hours, and it turned out to be a rush job.

The bread was unexpectedly heavy.  I suspect that either the starter didn’t have enough lift, or I didn’t let it rest and rise long enough. I could have given it the final proof overnight in the fridge instead of four hours at room temperature. Would that have made a difference? I don’t know. 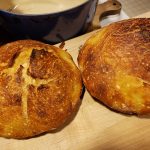 Don’t get me wrong!  The flavor and aroma were spot-on and the crisp crust was deeply-browned. I guess two out of three isn’t bad for a first effort. This is where experience comes in. If it had been my fifth attempt, I might have known from the look and feel of the dough that it was a little wet and heavy, and some corrective action was called for.  There are few ingredients but many variables in yeast breads.

I checked kingarthurflour.com, a reliable source for baking and breadmaking advice, to get their take on my results. I was relieved to find that there’s no shame in adding a little commercial yeast to sourdough for a more reliable and faster rise.  Their method takes a matter of hours instead of days. The loaves might not be so artisanal looking, but their light crumb was fully raised.

I learned that for authentic old-world sourdough loaves it takes a lot of practice along with a slow rise.  For example, Bill Buford wrote in the April 13 issue of the New Yorker about his time in France working at a boulangerie. A batch of baguette dough, made in the wee hours of the morning, included 110 pounds of flour, hot water (the precise temperature measured by feel) and a pinch of the previous batch of dough which served as a natural starter. After a full day of rest it was shaped and baked into some of Lyon’s most sought-after loaves.

For now, I think I’ll leave all that heavy lifting to the master bakers at Wave Hill Breads in Norwalk. Their remarkable loaves are the real deal, made with old-world technique and quality ingredients.  During these times, they’ll even deliver.

The sourdough starter turns out to be pretty needy. The mixture requires additional flour and water from time to time for the yeast to munch on. At the beginning, daily feeding is required; after that once a week on maintenance. Before feeding with more flour and water, some of the bubbly slurry needs to be discarded or the blob will get huge. 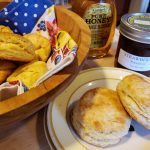 Discard, however is an unkind word that does not hint at the usefulness of this loose yeasty paste. Kingarthurflour.com includes a couple dozen recipes using the discard for leavening and flavor. They’re delicious.

For biscuits the usual buttermilk is swapped for a cup of the discard.  It’s a quick and easy recipe for richly-flavored results that have an irresistible dairy tanginess. Sourdough flapjacks, a staple of the old west, require an overnight rest, but their bold complex flavor and deep color is well worth it.  Other discard recipes include pizza crust, muffins, cakes, and even crackers.

While I was working on the bread, both my son and sister-in-law in California as well as my niece in Weston were also baking loaves.  The New Canaan library has an online blog for local teens baking bread. It looks like everyone is getting in on the fun.  We’ve got the time and apparently the itch for this rewarding challenge.

A Note on Spring Eating 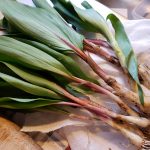 A handful of ramps

Along with the daffodils and flowering trees, both pink and white, cooks know it’s Spring because ramps are in season.  These wild leeks with their mild garlicky flavor are around if you know where to look. My foraging neighbor, Myriam, brought me a handful that she collected upstate. I’ve been keeping my eye on a local roadside patch ready for digging.  Ramps are a tasty addition to egg dishes, on pizza, or pickled. They’d be delicious in sourdough biscuits. 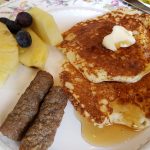 Next post From The Norwalk Hour: Restaurants Serve Up New Ideas

Previous Article From The Norwalk Hour: Corralling Some Yeast for Sourdough Bread