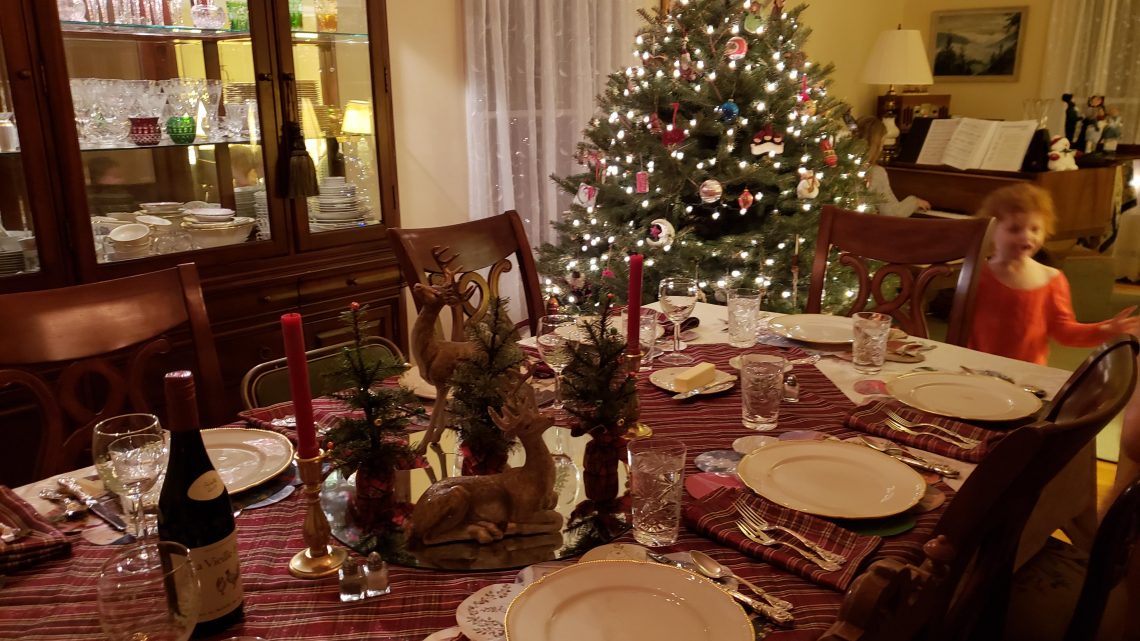 Christmas Eve dinner marks the end of holiday preparations and the beginning of the celebration. When the shopping is over and the wrapping done, friends and family gather for dinner.  Simple or fancy, casual or dressy, early evening or late, there are many traditions.

In some families, this is the big Christmas dinner with the good china and cloth napkins.   When there are little children involved, it’s usually earlier so Santa can get on about his business. If there is allegiance to two households, it can be the first of two Christmas dinners. 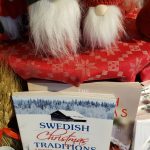 Strong cultural traditions often determine the menu.  Historically Catholic countries like Italy, Poland, and Portugal dine on seafood, the best known of which is the feast of the seven fishes. In places like England, Germany, and France the menu is richer, with a roast turkey, goose, ham, or beef at the center of the table. All these traditions and more have come to America.

In years past, we’ve enjoyed a supper centered around oyster stew, a long-time American Christmas Eve tradition.  It originates with Irish immigrants who found that our abundant oysters substituted well for dried cod in a Christmas stew like the one they enjoyed in the old country. With Norwalk as the oyster capital of the east coast, it’s an easy tradition to keep here.

Last year we expanded the menu to a feast of the seven fishes,  an ambitious and time-consuming undertaking. Originating in southern Italy where it is known as La Vigilia (The Vigil) it stretches out over Christmas Eve while awaiting the midnight birth of Jesus. Baccalà (dried salt cod) is the centerpiece of the menu. Other items might be mussels, clams, calamari, smelts, or shrimp.

Delicious as it was, it took too long and included too many new flavors to be a success with the grandchildren, who only wanted to get on with hanging stockings. Back to basics for this year.

Marsha grew up with Welsh rarebit on Christmas Eve.   This fondly remembered dish of cheese sauce over crackers has its origins as a showcase for wheat bread and cheddar cheese from Wales. Originally called Welsh Rabbit, the name morphed over time into Rarebit.  A little like a souped-up grilled cheese, the recipe calls for a cheddar sauce seasoned with beer and mustard to be browned over a slice of homestyle bread. It’s pretty kid-friendly and quick.

When Christmas Eve is the main food event for the holiday, a roast is the most popular choice. Turkey with all the sides (just like Thanksgiving) is an English tradition up and down the eastern seaboard. Other birds like goose or duck, are also traditional but less common. We have family members who have prime rib for their Christmas roast.  A fruit-glazed baked ham or a showy crown roast is also popular. 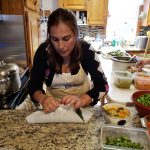 In the upper midwest, the menu takes a Scandanavian turn including pickled herring and rice pudding for dessert. Across the south rice is popular along with coastal seafood. Each immigrant group has brought its own Christmas Eve flavors.

Spanish speakers have introduced flavors from the Caribbean and Mexico, as well as Central and South America that are becoming part of the Christmas Eve canon — tamales, roast pork, salt cod, and fish soup, just to name a few.

Any food market that specializes in a particular regional or national cuisine is jammed at this season with their specialties.  The Scandanivain Butik on Main Avenue, The Taste of Europe on Westport Avenue and A-S Foods on New Canaan Avenue are all packed with Christmas flavors from home. 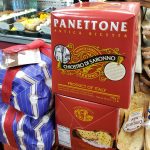 Dessert, of course, is important for Christmas Eve. Cookies and candies are plentiful. After all there has to be a plate for Santa.  Sugar cookies (plain or decorated), chocolate crinkles, shortbread, nut fingers, and Christmas trees are some of what we bake for Santa. There’s always some homemade fudge too (no nuts please).

Fruitcake is often seen across many cultures. It has a bad rap, but if you get a good one, I like it. The English have their own Christmas pudding and cake, Germans like stollen, Italians favor panettone.  They all hail from a time when candied fruit was an expensive luxury.

Everyone likes to put out the best stuff for Christmas Eve. 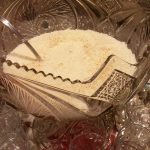 If there’s going to be a crowd, I like to make up a bowl of eggnog. It’s a once-a-year thing that seems just right. Rich with eggs and cream, fluffy with some folded in egg whites, and fragrant with nutmeg, it’s very Christmassy. Kids will enjoy its ice cream-like character, while the grownups can have it with a little spike of brandy or bourbon.

Christmas Eve is not about the dinner, of course. But what you eat and drink is part of the year-after-year celebration where we remember the tastes, aromas, and people around the table from times past and build memories for the future.  It’s the icing that holds the layers Christmas together.

Next post From The Norwalk Hour: We ate well in 2019

Previous Article From The Norwalk Hour: Gifts to Eat Will Bring Smiles on Christmas Morning